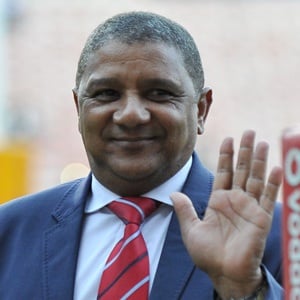 Cape Town - The South African Rugby Union (SARU) knows who the next Springbok coach will be, and according to president Oregan Hoskins the decision was agreed upon unanimously by the General Council.

SARU confirmed on Friday that the General Council, which includes all 14 Union presidents, had ratified the appointment but that the official announcement will only come on April 12.

It would be a major surprise to all if the new coach was not Allister Coetzee, but Hoskins was not giving much away on Friday.

He did, however, provide one small hint by saying that the new coach currently had a club, and that was part of the reason why the announcement was only to come within the next two weeks.

"Due to a number of issues … paperwork that needs to be done and contractual issues … issues around his club and things like that … it’s vitally important that we do not mention the name at this point in time," said Hoskins.

Coetzee is currently the coach of the Kobe Steel Kobelco Steelers in Japan.

"Out of respect for the whole process and the requests that have been made to us … we want to co-operate."

Hoskins added that the new appointment was "100% unanimous" among the General Council representatives.

Hoskins also confirmed that the coach's contract would be the regular four-year deal which would run until the 2019 World Cup.

Transformation is an imperative of SARU's moving towards that tournament, and Hoskins had re-emphasised towards the end of 2015 that the Springboks were seeking to be 50% representative by then.

The new coach, Hoskins suggested, would be able to facilitate that process.

"That was an issue and he certainly does tick those boxes so we’re pretty happy about that."

In terms of backroom staff and assistant coaches, Hoskins said that the appointments would be a collaborative effort between the new coach and SARU.

"It’s going to be a hybrid situation. It’s no secret that we have very important people on the payroll already and there are people that we have to still speak to the coach about," he said.

"There’s going to be a bit of both … there’s some key back-up staff that have to be appointed in consultation with the coach.

"There are certainly people that will be there because they are part of SA rugby already.

"I’m happy with some of the names that management have brought to me today, especially in terms of representation and how that whole team will look going forward. It’s crucial and it’s pleasing to know."

Rassie Erasmus has been heading a High Performance team at SARU and is expected to be involved in the set-up in some way.

"The High Performance committee and the department being headed by Rassie is very important and has been working very hard in terms of having a program ready for this year," said Hoskins.

"There’s been a lot of work taking place all the time. I would prefer to look at it as though he’s (the new coach) going to hit the ground running. There’s a work in progress already."

The new Bok coach will take charge of his first Test on June 11 when South Africa host Ireland at Newlands.

We live in a world where facts and fiction get blurred
In times of uncertainty you need journalism you can trust. For only R75 per month, you have access to a world of in-depth analyses, investigative journalism, top opinions and a range of features. Journalism strengthens democracy. Invest in the future today.
Subscribe to News24
Related Links
Western Province appoint new CEO
'Harsh' words for Hoskins and SARU
Baby Bok management team confirmed
Next on Sport24
EXCLUSIVE | Oregan Hoskins says SA Rugby rejected own legal advice to suspend Jurie Roux