2 of the greatest No 9s meet 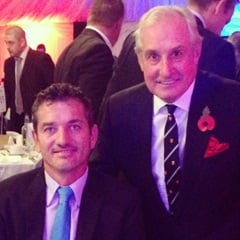 Van der Westhuizen, currently suffering from Motor Neuron Disease (MND), tweeted a picture of him and Edwards at a dinner in Cardiff.

One of my highlights of the evening. With one of my all time heroes #GarethEdwards, Van der Westhuizen wrote.

Van der Westhuizen played 89 Tests for the Springboks, while Edwards, widely regarded as the greatest scrumhalf of all time, donned the Wales jersey on 53 occasions and has 10 British & Irish Lions caps to his name.

While in the UK promoting his J9 Foundation, Van der Westhuizen was present at the final of the ATP World Tour Finals between Novak Djokovic and Rafael Nadal. Post-match the ATP Tour paid tribute to former president Brad Drewett who died as a result of MND.