'Boks up there with All Blacks' 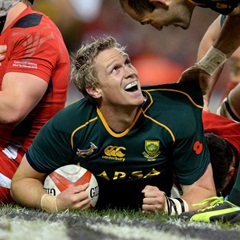 Taylor told Die Burger's website that Heyneke Meyer's Boks have developed into a rugby team with a "Plan A and B".

"If you analyse the Rugby Championship, then you'll see there’s very little to choose between New Zealand and South Africa. The All Blacks may be on top of the International Rugby Board's rankings, but I don't think South Africa are far behind," Taylor said at Murrayfield on Monday.

The Boks tackle Scotland there on Sunday.

"New Zealand are inclined to play more with the ball than South Africa, but that doesn't mean the Boks can't do it. On the contrary, they are playing like that at present.

"From what I saw in the Rugby Championship, South Africa can play in two different ways. They can keep ball in hand, but can also focus on driving play and tactical kicking. They are adaptable."

Taylor nevertheless indicated that they are bracing for a physical onslaught from the Boks.

"The key is to be just as physical as the Boks because they are huge and use it to their advantage."