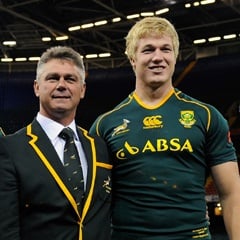 But the much-touted Sharks prospect, so imposing in the recent Currie Cup final, has effectively been bundled back inside it for this Sunday, with the key being thrown away, as it were.

Certainly the excited wish by many to see the blond second-rower earn some Test game-time alongside fellow youngster Eben Etzebeth seems further away right now than had seemed the case a couple of weeks back.

Du Toit, who got a modest 12 minutes’ debut in the victory over Wales in Cardiff last Saturday, isn’t even on the bench again this Sunday for the second tour challenge of Scotland at Murrayfield (17:00 SA time).

While the restoration of veteran Bakkies Botha in Etzebeth’s No 4 jersey after a lengthy stint in the Test wilderness was always expected when Meyer announced his reshuffled mix on Thursday, there had been some hope earlier in the week that Du Toit would start at five alongside the hardened campaigner.

Instead Botha teams up with his former Bulls ally Flip van der Merwe, who keeps his berth in the XV from the Millennium Stadium, while Etzebeth does get a sensible break of sorts by moving to a substitute’s role to keep him reasonably fresh for the six-day turnaround to the tour finisher against France.

Pairing Botha and Van der Merwe is just one way in which Meyer, in his defence, will have probably managed to head off any sense of indignation by the Scots that the tourists are showing them disrespect by fielding a too obviously “second string” on Sunday: this is a gnarly lock combo that could excel against any international comers.

But it is still just a little mystifying that Du Toit got a short, fairly inconclusive burst against the Welsh yet now falls right out of the match-day 23.

At the same time, Meyer looks ever more credibly like a man with the proverbial plan, so presumably we should not be guilty of reading too much into this move – there is still time aplenty for Du Toit to prove his worth ahead of the 2015 World Cup.

Having the mongrel element Etzebeth provides among the reserves at Murrayfield, also is a reminder that the Boks can freshen the pack very meaningfully in the unlikely event of crisis against the underdogs in Edinburgh: who wouldn’t want to be able to summon Messrs Etzebeth, Mtawarira, Du Plessis and possibly also Oosthuizen for even more tight-five grunt than already exists in the XV?

Former Bok captain Corne Krige (@CorneKrige6) tweeted soon after the announcement of the side:

“Great Bok team to face Scotland. Maybe HM should have given more of the newcomers a run.”

His views are likely to be supported by many other observers, some of whom, for instance, will be a tad surprised that captain Jean de Villiers stays stubbornly in the starting mix when this seemed the ideal opportunity not to subject him to another 80 minutes of hard slog.

Presumably he may have to get through the full game, too, because JJ Engelbrecht and not the precociously talented Jan Serfontein, who is more of a No 12 specialist, is the designated midfield cover on the bench against the Scots.

At the same time, there were some signs – albeit more specifically in the initial stages – in Cardiff that the old De Villiers-Jaque Fourie midfield alliance needs to scrape off some rust, so that ought to happen usefully here, in suitable preparation for the expected big French onslaught next Saturday ...