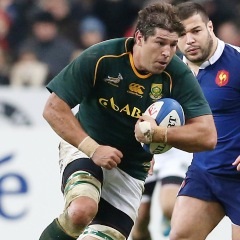 Johannesburg - While 2013 may rate among one of the best years for Springbok rugby, enforcer flanker Willem Alberts said the team would not be satisfied until it had secured a perfect record.

“The season as a whole was very successful, it is one of the best years the Boks’ has ever had, but we will never be satisfied if you don’t win all our games,” Alberts said on arrival in Johannesburg on Monday.

“We’ve worked hard as a team -- from the management down to the supporting staff -- so it was a good season for everyone.”

The Springboks ended the season with a 19-10 victory over France at the Stade de France in Paris on Saturday evening.

This was the Springboks’ 10th victory from 12 Tests this year, making the 2013 seasons statistically their most successful since 1998.

Finishing their November tour with three wins out of three, the Springboks had only been beaten by one team this year, world champions New Zealand.

Springbok lock and 2013 IRB World Player of the Year nominee Eben Etzebeth said as they had failed to topple the All Blacks this season, they would have to do it next year.

“We set ourselves goals at the beginning of the year and one of those was to be unbeaten on the end-of-year tour and we’ve done that," said Etzebeth, who arrived in Johannesburg on crutches after sustaining a foot injury.

“I am going for scans tomorrow and hopefully it is not too bad as I want to enjoy the December holiday without these crutches."

Etzebeth, 22, was the youngest of the five IRB World Player of the Year nominees, which included Kieran Read and Ben Smith (both New Zealand), Leigh Halfpenny (Wales and the British & Irish Lions) and Sergio Parisse (Italy).

He said the team used the outgoing tour -- which included the victory over France, a 28-0 crushing of Scotland and a 24-15 win over Wales -- to get the players used to the playing conditions ahead of the 2015 Rugby World Cup in England.

“The next world cup is in the northern hemisphere and we've won all our games there over the last two years. So everything is going well for us in our preparations as we work towards the next world cup.”