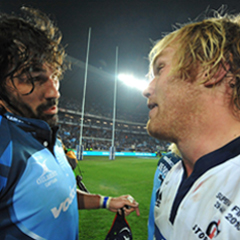 Schalk Burger (File)
Johannesburg - SANZAR will only on Tuesday decide whether to act on statements by the Stormers' captain Schalk Burger and coach Allister Coetzee about the handling of the match by referee Craig Joubert, but statistics to a large degree prove the Stormers allegations to be groundless.

The statistics of the match provided by South Africa's refereeing boss Andre Watson, make it quite clear there was no "coaching" of the Bulls by referee Joubert at the breakdowns as alleged by Burger, who after the match said that two sets of laws were applied by Joubert.

"After reports in various newspapers and websites I looked at whether there were grounds for the allegations," said Watson.

"According to the reports Craig Joubert allegedly "coached" the Bulls while the Stormers were simply penalised.

"With that as background, I went through every clip of the match - we have the technology to do so - and came to the following conclusions:

"On not a single occasion did he repeat any warning. He throughout warned both sides only once where it was applicable and then penalised them if they persisted.

"The Bulls were penalised seven times at the breakdowns and the Stormers six times. Every penalty but two, where he penalised immediately, came after warnings to the offending side."

The statistics were gathered by Watson because Burger, after the game, openly said two sets of rules were applied by referee Joubert in what is widely construed as an act that comes close to accusing the referee of cheating.

Watson would not respond to whether action would be taken against the Stormers captain - and coach - for their utterances.

"That is not my place, its SANZAR's decision."

SANZAR's director in South Africa, Johan Botes, said a decision whether to take the matter further will only be reached on Tuesday.

"At this stage the allegations are just hearsay. We are gathering all the facts and detail and SANZAR will take a decision on Tuesday," Botes said.

We live in a world where facts and fiction get blurred
In times of uncertainty you need journalism you can trust. For only R75 per month, you have access to a world of in-depth analyses, investigative journalism, top opinions and a range of features. Journalism strengthens democracy. Invest in the future today.
Subscribe to News24
Related Links
Bulls blaze to third S14 title
SARU clarify Stormers' 'try'
Bulls 'B' team key to victory
Next on Sport24
Bulls 'B' team key to victory