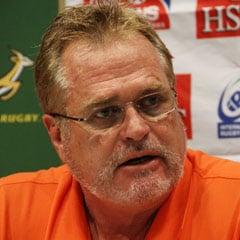 "On behalf of the Southern Kings, I would like to congratulate the Lions on their inclusion in next year’s Super Rugby tournament following the two promotion relegation games," said Watson.

"I would also like to take this opportunity to congratulate the Kings players and management for the fantastic work done during their debut season.

"What the Kings have accomplished in the limited time available to them has exceeded everyone’s expectations."

Watson said what had been most notable was the level of support from followers across the local, national and international community who came out in their numbers to support the fledgling franchise and players.

He added that the players had played with courage, character and commitment.

"Most importantly, we would like to thank all our loyal supporters who have shown that there is a hunger for top quality rugby in the Eastern Cape – and we assure you that we will do everything in our power to ensure that high calibre rugby continues to be played in the region at the Nelson Mandela Bay Stadium.

"We would also like to thank the Nelson Mandela Bay municipality and the Eastern Cape provincial government for their on-going support, as well as all our loyal sponsors who made this exciting season possible.

"All is not lost.

"A good foundation has been created through the Super Rugby experience and the sleeping giant which was EP rugby has been awakened.

"We will continue to build on those foundations and ensure that rugby in the region continues to grow from strength to strength."

Watson also dismissed media speculation that the Kings would be seeking legal recourse.

"This is not true, when we entered into the Super Rugby tournament we knew what the rules of the game were and we accepted that should we be at the bottom of the log, we would be playing promotion relegation for inclusion next year and we accept the outcome of the playoffs."

In connection with speculation over player movements, Watson said this was still at a sensitive stage as contracts were still being looked at and more information would be released in due course.

Will the Lions fare better or worse in 2014 than the Kings did in 2013? Send your thoughts to Sport24 to get published!
Related Links
Kings' Watson remains upbeat
Mass Kings exodus begins
Share
Next on Sport24
5 talking points: Super Rugby Week 12