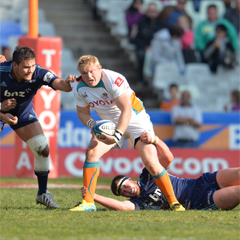 Bloemfontein - The Cheetahs secured their place in the knock-out stages of the Super Rugby competition by beating the Blues 34-13 at the Free State Stadium on Saturday.

With the four points earned against the New Zealand outfit, and another four from their bye next week, the Bloemfontein-based side rewrote the history books by booking their spot in the playoffs for the first time since becoming a franchise in 2006.

With their sights on the next round, the Cheetahs started well and scored in the second minute of the match, thanks to a penalty by flyhalf Riaan Smit.

The Blues answered back with a try from scrumhalf Jamison Gibson-Park after the New Zealanders effected a turnover from the resulting kick-off. Flyhalf Baden Kerr duly converted leaving the Cheetahs to regroup under the uprights.

The hosts created many chances, with the likes of Springbok utility back Willie le Roux carving through the Blues defence but, time and again, their last passes went astray.

The Cheetahs also struggled at scrum time, with Bok prop Coenie Oosthuizen getting pinched a couple of times.

Oosthuizen got his own back when he was awarded a penalty which Smit converted to bring his side within one point of the visitors.

The hosts reclaimed the lead after No 8 Philip van der Walt went over for a converted try from a tight-head scrum.

Kerr added a penalty to his points tally in the 27th minute, but the Cheetahs had the momentum.

Smit kicked another six points after the Blues stopped numerous attacks, two of them illegally, to give the hosts a half-time lead of 19-10.

The Cheetahs started the second half at ferocious pace but were prevented from scoring by some good defence with Blues wing Rene Ranger playing a dominant role.

Kerr scored the first points of the second half via a penalty to bring his side to within six points, but Smit soon increased the deficit after another Blues infringement.

A try in the 73rd minute from scrumhalf Sarel Pretorius and another five-pointer by replacement flank Boom Prinsloo took the game away from the visitors and propelled the Cheetahs into the top six of the competition.

The win also put paid to any hopes the Stormers and Sharks may have had to reach the playoffs.