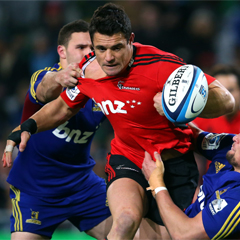 Dan Carter (Getty Images)
Dunedin - All Black flyhalf Daniel Carter responded to the challenge from young pretenders Aaron Cruden and Beauden Barrett to guide the Crusaders to a 40-12 victory over the 14-man Highlanders in their Super Rugby match on Saturday.

Carter slotted 20 points with the boot, scored a try and set up the other three as the seven-times champions ensured they remained in the hunt for the playoffs with the bonus-point victory.

They moved to 51 points and established a gap over the seventh-placed Waratahs (44), who have played an extra match. The Cheetahs are in sixth on 46 points but play later on Saturday.

The feisty game was punctuated with several off the ball incidents while Highlanders flankn Jarrad Hoeata was sin-binned by referee Steve Walsh in the first half for illegal play and Highlanders centre Ma'a Nonu sent off in the second for a dangerous tackle.

The first half was a tight tussle with the Highlanders' points coming from a converted Ben Smith try after Tamati Ellison had produced a behind the back offload.

Carter slotted two penalties, the second on the stroke of half-time to give the visitors a 13-7 lead at the break, and also converted George Whitelock's try, which he had set up with a powerful burst past Fumiaki Tanaka and Smith.

He also sparked Ellis' try early in the second half when he drifted across the defence, accelerated and put Tom Marshall into a gap before the winger fed Ellis.

The Highlanders appeared to be getting back into the match when Hosea Gear, playing his 100th Super Rugby match, scored in the corner but Nonu was sent off shortly after and they lost much of their impetus.

Carter slotted two penalties then scored his try, which he converted and he then seized the opportunity on his own tryline to spin the ball wide to replacement wing Telusa Veainu, who went the length of the field to secure the bonus point fourth try in the final minute.