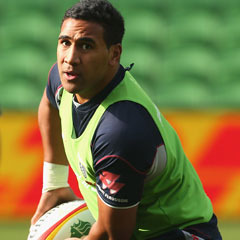 Sydney - Super Rugby club Melbourne Rebels announced on Tuesday they have agreed to release wing Cooper Vuna at the end of the season, freeing him to play in Japan.

Vuna, who enjoyed a successful career in rugby league before switching to rugby union, will play his final match for the Rebels on July 12.

"The former New Zealand Warriors and Newcastle Knights winger will leave the club at the end of July to play for Japanese rugby team Toshiba," the Rebels said in a statement.

Since his arrival in Melbourne in 2010, Vuna has played 33 Super Rugby matches. He made his Test debut for the Wallabies in 2012 against Wales in Brisbane.

The 25-year-old was embroiled in controversy earlier this year when he and Wallabies star Kurtley Beale were sent home from South Africa after the Rebels' record 64-7 Super Rugby loss to the Sharks in Durban.

Reports said Vuna intervened after Beale punched skipper Gareth Delve on the team bus after a nightclub outing following Melbourne's loss, and the pair went on to trade blows.