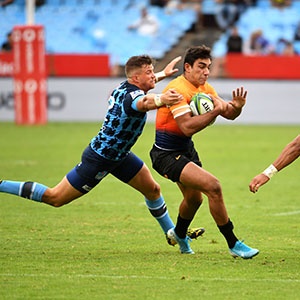 1. Lions in a spot of bother

The Lions face an uphill task on tour after losing 29-17 to the previously winless Waratahs in Parramatta.

The men from Johannesburg slipped 19-3 down after 17 minutes and two Waratahs tries came in the period when Lions lock Ruben van Heerden was in the sin-bin for a 'push in the face' of Waratahs counterpart Rob Simmons.

It was a deficit the Lions could never recover from and they now face an uphill task for the remainder of their tour.

Next up for the Lions is a duel with the Rebels, fresh off an upset victory over the Highlanders in Dunedin.

Another loss in Melbourne and it will take a brave man to bet on the Lions to beat either of the Blues and Highlanders in their final two tour games.

The Sharks' 33-23 win over the Reds in Brisbane saw them finish their Australian tour with three wins from four matches.

They are now only one point behind the Stormers in the South African Conference, but with seven of their remaining 11 games to be played at home, and the Stormers yet to tour, the Sharks appear the best bet for the conference winners.

The Stormers suffered their first defeat of the season when they were upset 33-14 by an unpredictable Blues outfit at Newlands.

The Cape side couldn't dominate at scrum time as they had in previous games and struggled to get on the front foot.

The hosts were also caught off guard by the Blues' tactics as the men from Auckland used the width of the field well and employed their big loose forwards in the wide channels.

The Stormers defence seemed puzzled and it explains why they slipped a whopping 37 tackles.

They also lacked inventiveness with ball in hand and could only beat nine Blues defenders on the day.

The Bulls suffered a fourth successive loss when they were beaten 39-24 at home to the Jaguares.

They slipped 30 tackles as the men from Argentina ran in six tries. This statistic simply won't cut it at Super Rugby level.

The men from Pretoria also seem to lack impetus on attack, with the use of one-off runners making them far too predictable.

Nick Mallett summed up the Bulls' performance quite well in the SuperSport studio afterwards: "It was a comedy of errors when they were on defence and attack. Whenever they were on attack, they would just use one-off runners, which is the easiest way for any defence to defend against. The attack was hopeless and their defence was embarrassing. There was a clear lack of understanding on how to defend a counter-attack and how to defend a shifting centre."

5. From bad to worse for Stormers fans

It will be a Blue Monday for Stormers fans who woke up with the news that star Springbok flank Pieter-Steph du Toit was set to be out for two months after sustaining a leg injury in the defeat to the Blues.

Du Toit's workload has been heavy to start the season and his injury layoff is perhaps not a bad thing from a national perspective.