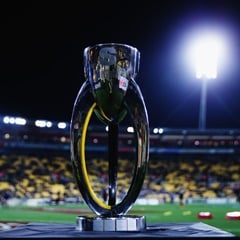 Sydney - Australia's beleaguered rugby chiefs insist they have not botched their efforts to reduce the country's Super Rugby presence despite players calling the saga a "fiasco".

The Rugby Union Players Association (RUPA) on Wednesday unanimously backed a Victorian Rugby Union call for an emergency meeting of ARU voting members to examine the governing body's processes as the sport agonises over which team to axe from next year's competition.

The RUPA board, which includes Wallabies captain Stephen Moore and fellow Test stars Bernard Foley, James Slipper and Scott Sio, have blasted the ARU for a lack of transparency and consultation "in this ongoing fiasco".

It follows the ARU announcing in April that either the Western Force or Melbourne Rebels would be cut from the southern hemisphere competition along with two South African teams in 2018.

ARU chairperson Cameron Clyne, who has agreed to the meeting, denied the culling process had been botched.

"Nothing could be more incorrect," he told The Australian newspaper Thursday.

"We haven't botched the process... we have been very clear about how the process is being run but a lot of that has got lost.

"There is no floundering. We are responding to people who are desperate to stay in the competition."

RUPA vehemently opposes any reduction to the number of Australian teams, presenting various models to the ARU for consideration by Super Rugby's governing body SANZAAR which support the retention of all five franchises.

Clyne said the ARU did not have a fallback plan.

"We are just focusing on working towards our stated position of having four (Australian) teams," he said.

RUPA chief executive Ross Xenos believes the threatened Rebels could potentially be bought by the ARU for up to Aus$10m and then shut down.

"The most consistent narrative we hear from the ARU is about the financial challenges the game faces and how tough times are," Xenos told the newspaper.

"Axing an Australian team and disenfranchising a rugby community was justified five weeks ago by the ARU on financial savings.

"Now, Aus$6-$10 million promised to be invested into the game, including at grassroots level, could be burned so that the ARU can cull a team and save face around the SANZAAR table."

Related Links
Du Plessis gets season-ending ban
Blitzboks refuse to rest on laurels
SA Rugby rules out merging of franchises
Share
Next on Sport24
Crouch, engage! Lions prop Sti Sithole on his game maturing and proposing to his fiancée