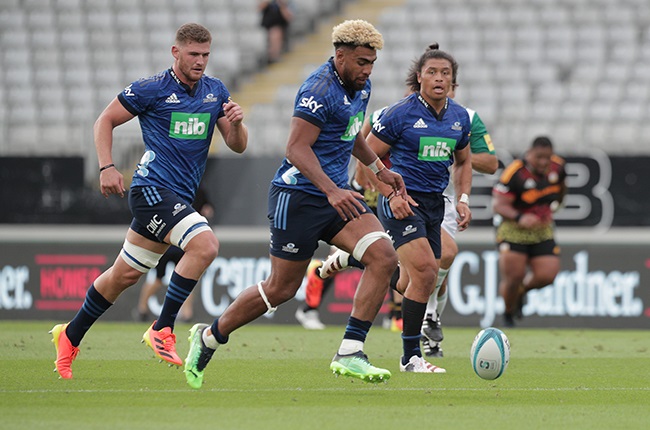 The Blues opened their account in Super Rugby Pacific with a nail-biting 24-22 win over the Chiefs at Eden Park on Saturday.

It was a close contest throughout and the victory could have gone either way, but in the end, the Blues were able to snatch victory thanks to a 76th-minute try from winger Mark Telea and a clutch conversion from Stephen Perofeta.

After Harry Plummer opened the Blues' account with a penalty in the third minute, Brad Weber hit back with the Chiefs' first try shortly after when the visitors forced a turnover and the scrumhalf booted it down the field and took full advantage of a favourable bounce to regather and score.

Josh Ioane couldn't add the extras, while Plummer missed a chance to put the Blues back in front moments later.

Halfway through the opening 40, the Chiefs were in for their second try when Etene Nanai-Seturo flummoxed Mark Telea with a dummy and shrugged off the tackle of Tom Robinson to score, with Ioane adding the extras this time.

But the Blues hit back with their opening try less than five minutes later from the back of a five-metre scrum, Caleb Clarke going over after collecting a skip pass from Stephen Perofeta and cutting inside two defenders.

Ioane missed another shot at goal a few minutes later as it stayed 12-10 to the Chiefs at half-time.

The Blues were back in front six minutes after the break when their electric No 8 Hoskins Sotutu charged down Chase Tiatia's kick and hoofed it upfield, where another unkind bounce got the better of Ioane and allowed Sotutu to regather and score.

But a few minutes later the Blues were reduced to 14 men when try-scorer Clarke was given his marching orders for being offside and committing a deliberate knockdown.

It took the Chiefs just two minutes to take advantage after No 8 Pita Gus Sowakula broke off the back of a 5m scrum and sucked in a defender before offloading to Robinson for his brace.

Bryn Gatland added the extras to hand the visitors a 19-17 lead with around 25 minutes to play with another shot at goal following not long after to extend their lead to five.

But true to the see-saw nature of the match, the Blues weren't done yet.

With four minutes to play, Sotutu collected the ball from the back of the scrum and offloaded to substitute Beauden Barrett, who sent a wide ball out to Perofeta.

The fullback did a superb job of sucking in a few defenders before finding Telea who ran into the corner for the score to tie up the scores before Perofeta added the extras from the touchline with a superb kick to give the home side the lead.

The Chiefs had a chance to snatch the win in extra time but Gatland's shot at goal was wide and the Blues survived to collect their first win of Super Rugby Pacific.