Bulls No 9 Ivan van Zyl on Fourie du Preez: The stuff we learn can only come from him 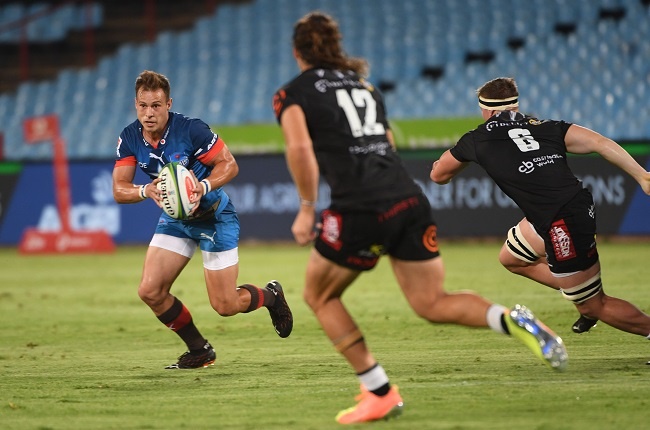 It's admittedly only been two weekly sessions to date but Fourie du Preez has already earned a rave review from Bulls halfback Ivan van Zyl.

The peerless former Springbok and Bulls scrumhalf was recently recruited as a consultant by Jake White, the franchise's director of rugby, with the specific brief of spending time with his two talented No 9s.

Van Zyl and Embrose Papier have been involved in a longstanding rotation system since both becoming Springboks at the end of 2018 though that dynamic hasn't been kind to the two players, who both admitted previously that they suffered a knock to their confidence.

Yet, judging by a promising start to Super Rugby Unlocked by the duo, clear communication and Du Preez's immense know-how has seen them turn over a new page.

"Having Fourie here once a week is incredible," Van Zyl said on Monday.

"His presence is priceless. His experience and the way he views the game is something you don't get exposed to a lot in your career. We've been learning a lot."

Tellingly, Du Preez hasn't been enlisted to fundamentally change the way Van Zyl and Papier, who are considered opposites in terms of style of play, conduct things from the base of the ruck.

Rather, the 76-cap international - who won a World Cup under White as well as two Tri-Nations titles - is using his unique technical insights to subtly unlock the abilities of his two students.

"It's all about the smaller details with him, the way you approach your game and how you bring your forwards into the game for example," said Van Zyl.

"I'm pretty sure some of the stuff we've learnt from him are things that only Fourie can teach you. When you play at this level, it's the finer things that make a difference. We're very fortunate to have him working with us."

While Du Preez's influence is steadily having an effect on revitalising the duo, Van Zyl also admitted that he and Papier have made a mind-shift with regards to their competition.

"We've had this conversation quite a few times before. Embrose and I get along really well with each other, as team-mates and friends," he said.

"But I do think to some extent we've made a mind-shift. The thing that the two of us keeping in mind all the time is that the team is all that matters to us.

"That's really a message that coach Jake has rammed home for us. Everything the two of us do is for the benefit of the team. Whether him or I start, it's about providing what we specifically need on the field during a specific game. More importantly, coach Jake is behind us all the way.

"We know what we're good at and we know what we need to still work on. But we have the confidence to know that we're being backed."

We live in a world where facts and fiction get blurred
In times of uncertainty you need journalism you can trust. For only R75 per month, you have access to a world of in-depth analyses, investigative journalism, top opinions and a range of features. Journalism strengthens democracy. Invest in the future today.
Subscribe to News24
Related Links
England boss Jones takes emotion out of Barbarians call-off
Wales to play home Autumn Nations Cup matches in Llanelli
Kolisi out, Willemse back, Pieter-Steph update ahead of Stormers' Loftus trip
Next on Sport24
Son of rugby great Michael Lynagh signs for Reds