Cape Town - It may be a different week and different opposition they are facing but the Stormers have come back from their bye week facing a similar story to the one they were confronted with the last time they played.

Before their last match against the Lions, the Stormers were coming off a defeat to the Bulls and were facing a team that was also hurting.

It’s the same again now, with the Stormers coming off a humiliation at the hands of the Lions and facing a Sharks team in Durban that will be seething after the embarrassment of their big home defeat to the Bulls.

Unsurprisingly, what is being said ahead of this game doesn’t differ much from what was said last time either. It was forwards coach Russell Winter who said two weeks ago that the Lions’ defeat at the hands of the Crusaders was not good for the Cape team.

He said he feared a backlash, and that was exactly what the Stormers got, with a fired-up Lions bouncing back from defeat with a ferocious performance that saw them top the half century mark at Ellis Park.

Stormers fans will hope the feeling of déjà vu will end with what has been said and will not be replicated on the field on Saturday as another assistant coach, Paul Feeney, almost repeated Winter’s words verbatim on Monday. Swap the Lions with the Sharks and we could easily be in a time-warp.

“We don’t read too much into the Sharks’ big defeat to the Bulls,” said Feeney.

“The Sharks will obviously be disappointed with the way they played and I would be surprised if their coaches didn’t have one or two harsh words for them this week. They will be training extra hard this week. It wasn’t a good result for us to be honest with you.”

It wasn’t, though the Stormers are in the same place as the Sharks. While the Sharks should have been severely embarrassed for losing a home game by 30 points, there was a lot of criticism directed at the Stormers after they lost 52-31 to the Lions ahead of their bye week.

The Stormers have lost by some big scores to New Zealand teams down the years, but it is rare for them to concede 50 against a fellow South African team.

“The two teams who play on Saturday are in exactly the same position and will both be playing for the same thing, which is to restore pride after a big defeat,” agreed the Stormers’ star player from the Lions game, Pieter-Steph du Toit.

“It just didn’t go for us in Johannesburg and we have had a few hard words since that game. We have made a few changes to our game plan and I am sure the Sharks will have done the same after the Bulls match.”

Last year Du Toit was an under-performer in the Kings Park clash between the Stormers and his old team.

The Springbok squad for the series against the French had already been announced, and with most of the Stormers contenders already knowing they were in the Bok group and the Stormers comfortably ahead of the Bulls in the old conference system, they had less to play for than the Sharks. The hosts were sore at having some of their top players shunned by the then national coach, Allister Coetzee.

The Stormers were flat against the motivated Sharks and their coach Robbie Fleck was understandably furious with his charges afterwards. This year is completely different, with just one point separating the two teams on the conference log and the Sword of Damocles potentially looming for the loser.

Not that Feeney believes that it is quite make or break yet for the Stormers, and he reminded the Cape media on Monday that the Durban clash is an away match for the Stormers.

“There is no doubt that this is an important match for us, as if we lose we will be making it very hard for ourselves, but whether or not you could say everything hinges on this game depends on how you look at it,” said the Stormers assistant coach.

“We have eight games left, but we have five home games after this and just two away against the Jaguares and the Sunwolves. You have got to look at the draw. Last year we did well early on when we had four home games in our first six matches in the competition. This year we had six away matches in our first nine.

“There will be lots of looking out at how other teams do in the next couple of weeks. The Lions still have to tour and have four games in Australasia. A lot can happen. But if we lose on Saturday against the Sharks and then go on to win our next seven games I would reckon that (regardless of what happens elsewhere) we’d be strongly in the mix (for a play-off spot).” 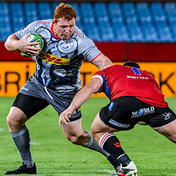