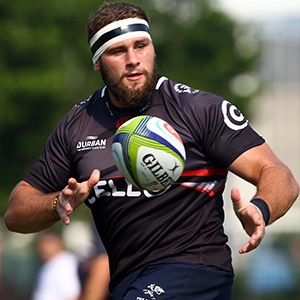 Cape Town - Sharks prop Thomas du Toit is the latest player to extend his contract with the Durban-based franchise.

The Sharks on Thursday announced that Du Toit signed a deal that will see him play for them until the 2019 season.

Earlier this month, the Sharks had already signed contract extensions with several other players, including hooker Akker van der Merwe (2019), props Mzamo Majola and John-Hubert Meyer (both until 2020), locks Hyron Andrews and Wian Vosloo (both until 2019), scrumhalf Cameron Wright (until 2019), utility back Courtney Winnaar (until 2020), fullback Rhyno Smith (until 2019) and centre Johan Deysel (until 2019).

The Sharks will open their 2018 Super Rugby campaign against the Lions in Johannesburg on Saturday, February 17.

This Monday's Advent calendar reveal brings his dynamic distribution back to the Cell C Sharks going into 2018- We're proud to have Louis Schreuder join us on #OurSharks Journey! pic.twitter.com/aMW0NWDNzR

Tyler Paul has signed with #OurSharks going into next year and until 2020!
He makes a welcome addition to our squad, and our signing advent calendar! pic.twitter.com/70yTmlnfER

As we head into the last 10 days of our Advent Calendar, we're proud to announce that dynamic centre, Marius Louw, will be in Durban as part of #OurSharks setup for the next few seasons! pic.twitter.com/Dzre51bqEW

We live in a world where facts and fiction get blurred
In times of uncertainty you need journalism you can trust. For only R75 per month, you have access to a world of in-depth analyses, investigative journalism, top opinions and a range of features. Journalism strengthens democracy. Invest in the future today.
Subscribe to News24
Related Links
Wallaby great Ken Catchpole dies at 78
CJ Stander commits future to Munster
No bonuses for unhappy WP staff
Next on Sport24
5 talking points: Super Rugby Unlocked - Week 7