Elton Jantjies: I'm not interested in a duel with Damian Willemse Elton Jantjies (captain) of the Lions and Siya Kolisi (captain) of the Stormers during the SuperFan Saturday match between Emirates Lions and DHL Stormers at Loftus Versfeld Stadium on September 26, 2020 in Pretoria, South Africa. (Photo by Sydney Seshibedi/Gallo Images)

Elton Jantjies has downplayed his battle with Damian Willemse at this weekend's Springbok Showdown, reiterating that he's not interested in focusing on duels.

The Lions skipper and flyhalf was steady if unspectacular behind a pack that was stuck in reverse against a powerful and pedigreed Stormers tight eight.

That allowed the 22-year-old Willemse a platform to dictate from, which he largely failed to do. The Stormers pivot's kicking was decent and he threw a sharp, brilliantly timed flat pass for centre Dan du Plessis' try but he still seems uncomfortable and rushed in his decision-making.

Both men should be keen to be more influential in Saturday's exhibition at Newlands, with Jantjies featuring in the Green squad and Willemse in the Gold group.

But Jantjies, rather emphatically, doesn't want to see it as a shootout for the Springbok flyhalf jersey in the absence of Handre Pollard.

"I've always maintained that the game isn't about individuals," he said.

"Damian had a good game, particularly at the beginning. He's kicking was good. But to me, rugby really is about a team. Where can we improve in our systems? It has relevance on the Springbok Showdown too.

"That's just the way I am. I'm always learning and I tend to focus on myself and the team. It's about what you can contribute."

While Jantjies will undoubtedly channel all his energy for this weekend's proceedings, he's also eager to get his franchise back on track after a poor Super Rugby showing and a false start at Loftus last week.

Assisting him greatly in that regard is a senior group of players and leaders bolstered by the returns of Jaco Kriel and Ruan Dreyer as well as the acquisition of Burger Odendaal.

"There's great leadership here. Burger was captain at the Bulls, Jaco's pedigree is well known and Ruan brings a lot of experience back from England," said Jantjies.

"He can feed the boys some knowledge on the northern hemisphere. That's the way we're going anyway. They've really slotted in well. They are guys that are comfortable speaking. That's a real positive for us."

We live in a world where facts and fiction get blurred
In times of uncertainty you need journalism you can trust. For only R75 per month, you have access to a world of in-depth analyses, investigative journalism, top opinions and a range of features. Journalism strengthens democracy. Invest in the future today.
Subscribe to News24
Related Links
Sharks' Fassi to miss rest of 2020 after shoulder surgery
GOLD goes to ... new-look Bulls centre pairing
Cornal Hendricks' reinvention looks like White's first Bulls masterstroke
Next on Sport24
Stormers coach wary of Pumas threats: 'They've got a good kicking game... can strike from wide' 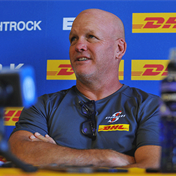