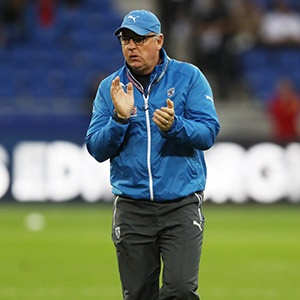 The Bulls have confirmed that Jake White will coach their Super Rugby team in 2021 – and are confident that he won't jump ship.

White was on Wednesday confirmed as the Bulls' new director of rugby with immediate effect until the 2023 Rugby World Cup in France.

White replaces Alan Zondagh, who resigned in January, but will also take over from Pote Human as head coach next season.

In an interview with Netwerk24, Blue Bulls Company (BBCo) Alfons Meyer said White would not go the same route as former coach John Mitchell, who left the Bulls after just one season.

The former Springbok coach has in the past stated his desire to again coach at international level.

"We had a long chat with Jake about it. He explained in detail what happened in the past with the other teams he coached.

"There is also a clause in his contract that will prevent him from jumping to the next best post. We are convinced that Jake has fully committed to the Bulls," Meyer said.

White won the World Cup with the Springboks in 2007 and also coached teams like the Brumbies (Australia), Sharks (South Africa), Montpellier (France) and Toyota Verblitz (Japan).

We live in a world where facts and fiction get blurred
In times of uncertainty you need journalism you can trust. For only R75 per month, you have access to a world of in-depth analyses, investigative journalism, top opinions and a range of features. Journalism strengthens democracy. Invest in the future today.
Subscribe to News24
Related Links
Cheika reveals hurt at not winning major Wallabies trophy
Eddie Jones takes pay cut amid coronavirus crisis
Coronavirus lockdown will be a huge challenge, admits Am
Next on Sport24
Son of rugby great Michael Lynagh signs for Reds