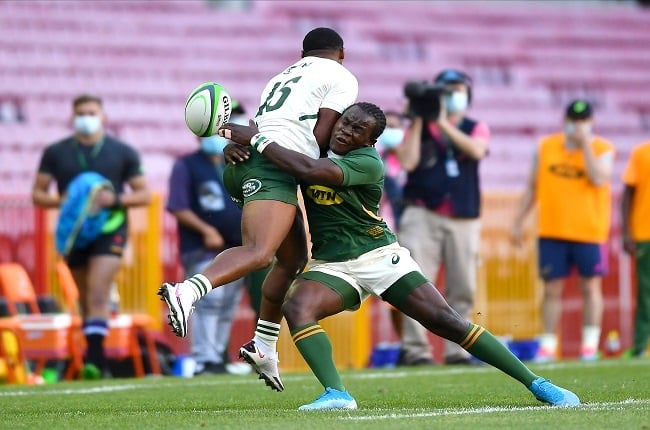 Yaw Penxe's pedigree as a proven performer in PRO Rugby was a decisive factor in the Sharks moving for the gifted winger on a short-term deal.

The 23-year-old Southern Kings star has been left in limbo following the franchise's liquidation a few weeks ago and the sheer wastefulness of him remaining inactive came to head with a fine performance at the Springbok Showdown at Newlands last week.

National assistant coach Mzwandile Stick was so impressed with his protégé that he predicted Penxe wouldn't be stuck in PE anymore within the next fortnight.

As it turned out, it took about three days.

"Yaw is a player that's shone in the PRO14," Sean Everitt, the Sharks' head coach, said on Wednesday ahead of his team's Super Rugby Unlocked opener against the Lions at home on Friday evening.

"But he also did a damn good job on Saturday (at Newlands). He nearly had a try-scoring opportunity and worked hard on the field. Certainly a young guy like that can add huge value to our cause."

Penxe's presence also helps alleviate a current shortage of options on the wing, with Springboks Makazole Mapimpi and S'bu Nkosi having departed for Japan and still recovering from injury respectively.

"It's unfortunate that we've had injuries in that position and as well seeing Mapimps depart. He's arrived safely in Japan and we're really pleased for him that he's got that opportunity," said Everitt.

"S'bu is another two to three weeks away, while Madosh (Tambwe) only just missed out on selection this week but the extra week will actually do him good."

Meanwhile, Everitt is keen to see how Sanele Nohamba, who set up Penxe's almost-try last weekend, kicks on from an encouraging showing in the Springbok Showdown.

"Sanele was a shining light. I was extremely happy for him. I think the week he had with the Springboks was very good for him from a learning point of view," he said.

"He's already brought some of that confidence back to training this week. He's a livewire scrumhalf, quick and agile. He certainly understands the game.

"Interestingly, for such a young guy, he already brings leadership into the mix too. He knows his role and responsibilities. He's able to conduct things from the back of the scrum. We're really excited about his growth at senior level."

We live in a world where facts and fiction get blurred
In times of uncertainty you need journalism you can trust. For only R75 per month, you have access to a world of in-depth analyses, investigative journalism, top opinions and a range of features. Journalism strengthens democracy. Invest in the future today.
Subscribe to News24
Related Links
Sale Sharks miss playoffs as Worcester match called off after fresh coronavirus cases
Kok, Libbok start as Sharks name strong team for Super Rugby Unlocked opener
Kings duo get lifeline at Sharks
Next on Sport24
Pokomela leads Cheetahs at Ellis Park, USA Eagles scrumhalf cracks nod on bench