Pieter-Steph exits contract with WP, but could sign new deal 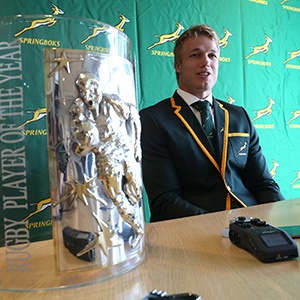 Pieter-Steph du Toit exited his Stormers contract on Thursday night with the intention of staying at the union.

Sport24 understands that the Stormers were on Saturday working on a new agreement with the 2019 World Rugby Player of the Year.

As is stands, though, Du Toit is effectively without a contract and, technically, a free agent.

It was confirmed through Western Province Rugby Union (WPRU) president Zelt Marais, who spoke to Sport24 on Saturday, that Du Toit was no longer contracted to the union.

A 21-day window, that ended at midnight on Thursday, was granted for professional players in South Africa to exit their existing contracts with their unions.

Du Toit was one of three players - the others were Cobus Wiese and Jean-Luc du Plessis - to submit their termination notices to the union.

SA Rugby is on a major cost-cutting mission in reaction to the economic impacts of the global coronavirus crisis, and pay cuts have been implemented across the board at unions with players and staff all impacted.

In Du Toit's case, it means that he could have faced up to a 43% reduction in salary had he stayed at the union on his old contract.

Now, with that contract no longer, negotiations are taking place over what would be a new deal that could potentially see the financial damage of the paycut limited.

"As previously indicated by WP Rugby, the existing contracts between the players and the Company are considered as binding and WP Rugby has reserved the right to hold players to these contracts or exercise other rights that may be held," WP said in a statement on Saturday.

"These options will be discussed with the players that have purportedly cancelled their contracts and more information about the course of action will be provided in future."

It is further understood that, on Saturday, Stormers coach John Dobson and Andre van der Veen, who serves on WP's steering committee, were engaging with Du Toit's representatives over a proposed new agreement between the parties.

If that deal does not materialise, then Du Toit does have other interested parties - from France and Japan - to fall back on.

"Pieter-Steph is staying at Western Province; there is just some paperwork to finalise and there may be one or two sticking points there," Du Toit's agent, Gerrie Swart, told Daily Maverick on Friday.

We live in a world where facts and fiction get blurred
In times of uncertainty you need journalism you can trust. For only R75 per month, you have access to a world of in-depth analyses, investigative journalism, top opinions and a range of features. Journalism strengthens democracy. Invest in the future today.
Subscribe to News24
Related Links
Dillyn Leyds' emotional goodbye to Stormers, SA
Stormers expecting to lose flyhalf Du Plessis
Will he stay or go? Confusion now reigns over Pieter-Steph's future
Next on Sport24
Ex-All Black Aaron Mauger to coach Moana Pasifika