Cape Town – Several individual players have struggled to find best known levels of performance in the first half of the Super Rugby 2018 ordinary-season programme … only amplifying the rank mediocrity, for the most part, of the SA conference.

Hot on the heels of Wednesday’s probe into some leading lights, here’s my pick of players who, arguably, will be seeking stronger “second halves” to the tournament roster …

Usually an excellent grafter, mobile linker and broadly intelligent eighth-man, Carr has lost some of his lustre in recent weeks – going especially quiet, I felt, in successive, clear-cut derby defeats to the Bulls and Lions. But it is also something I feared might happen as the 27-year-old spent much of his supposed off-season on a three-month deal in the tough, grinding English Premiership with Wasps. By all accounts, he played some blistering matches for them … but may now be paying a price for fatigue. The Test window break should come in handy for this five-cap Springbok, although the Stormers may need him to find some reserve strength well before that if they aren’t to be dead in the water by the late-June resumption. An alternative No 8 at Newlands, Sikhumbuzo Notshe, also hasn’t been banging the door down enough, given his athletic abilities.

Have the cares of captaincy been weighing down the lanky second-rower too much? Hardly helped by the fact that the initially quite highly-touted Sharks sport only two victories from eight matches, Botha will doubtless be the subject of some discussion in Durban around whether leadership is good for him or not. Boasting many of the qualities required for a top international lock, Botha still lies a decent fourth, competition-wide, for lineout claims. But he has been less active and assertive in other areas than might have been wished of him at the start of 2018 … and perhaps the same applies to partner Stephan Lewies?

You have to admire Kolisi for the candid, critical way he judged his own performance (which was, indeed, poor for a Springbok open-side incumbent) after the thumping loss to the Lions in Johannesburg recently. Generally speaking, the normally dynamic No 6 hasn’t produced anything like the sort of displays he did for the Springboks in that capacity in some of his more rousing Tests last year. Apart from not being especially visible in turnover terms, he has also missed a few key tackles as the Stormers have grappled with unusual levels of defensive trauma. Important games loom for him (and several franchise-mates, to be fair) if he is to book his June berth for the Boks.

The bulky, specialist No 4 lock was a pillar of strength for the Lions for much of their rousing 2017 campaign … certainly an unsung hero a lot of the time at the heart of the engine room for his mauling and driving gusto and sound scrummaging. But he just seems to have dipped a notch this year, to the extent that at times he has been omitted – though “rotation” can come into play -- and Marvin Orie, boasting different physical proportions and more familiar with a No 5-type role, asked to fill the void at four.

The consistently industrious showings of veteran Springbok Tendai Mtawarira for the Sharks (put it this way, whenever he’s picked up a niggle he’s been sorely missed both in general play and at scrum-time) have served as a signal that the 98-cap Test stalwart isn’t ready to play second fiddle at loose-head yet to the six-years-younger Kitshoff. Not helping the Stormers man’s cause is that his own form has unusually faltered of late: he is normally much more destructive both at set-piece and with his barrelling charges. Right now, the “Beast” justifiably still heads the Bok pecking order at No 1, though Kitshoff has time (and talent) yet to change all that …

Speaking of second fiddle … up at Loftus, broad-shouldered Pierre Schoeman, although Edinburgh-bound after Super Rugby 2018, has firmly nailed himself to the starting berth at loose-head prop for the Bulls. So that goes at least some way to explaining why game-time has been very sporadic for Gqoboka, highly rated by some experts, especially in the ball-carrying and tackling department. But when he has entered the fray off the bench, the former athlete and soccer player from Tabankulu hasn’t yet caught the eye in a major way as an impact factor.

He has had some injury-related setbacks to contend with, which may explain why the chunky midfielder has struggled to really wow onlookers this year. But Janse van Rensburg has also suffered some expensive lapses in defensive concentration, and been guilty of questionable option-taking. So the otherwise explosive player has more often than not found himself as second choice to the leaner, more subtle Harold Vorster in the No 12 berth for the Lions. He must hope for better breaks in their remaining eight ordinary-season fixtures.

Still only 22, remember, Nkosi burst into the limelight last season with some muscular, incisive showings for the Sharks both in Super Rugby and later the Currie Cup. There were certain shades of a “mini-Lomu” in the way he put his robust physique to good use, opponents often finding it hard to bring the winger to the deck. But he has been less prominent in 2018 so far – not aided, it must be said, by the Sharks’ struggle to create consistent opportunities and space in wider berths.

Some experts, including former Stormers and Springbok captain Jean de Villiers, insist Leyds is better employed at fullback than wing, although he has often been required to assume one of the wider spots this season. Still, wherever in the back three he has been assigned, the versatile 2017-capped Springbok hasn’t yet shown off as many of the game-busting qualities – like those electric bursts from deep – that he demonstrated at Newlands last year and before.

The well-travelled fullback, now 29, is roughly at his first-class prime … yet just of late come under increasing scrutiny for some of his decision-making in under-pressure situations. While still an elusive, swerving runner on a good day, his clearance kicking, especially, has left quite a bit to be desired in successive out-of-town derby setbacks by the Stormers that have badly punctured their knockout-phase aspirations this year.

We live in a world where facts and fiction get blurred
In times of uncertainty you need journalism you can trust. For only R75 per month, you have access to a world of in-depth analyses, investigative journalism, top opinions and a range of features. Journalism strengthens democracy. Invest in the future today.
Subscribe to News24
Related Links
S15: Ten SA players who HAVE shone so far
Ox Nche invited to Springbok alignment camp
Rassie: We have the ‘ammo’ to be successful at RWC 2019
Next on Sport24
Jaco Kriel withdrawn from Lions squad for personal reasons 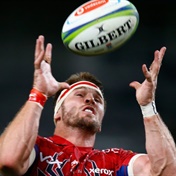