Cape Town – In the fifth of a six-part examination of the South African teams’ resources for Super Rugby 2018, Sport24 studies the various second rows … also providing a score out of 10 in each instance for expected level of health in the department.

Right, after not scoring too robustly for depth in many of our prior categories, the Bulls come roaring back here: in short, their lock stocks look the best of all South African franchises.

Coach John Mitchell, himself a second-rower for periods of his first-class playing career, should have the luxury of being able to rotate his locks confidently, knowing that there will be little or no dipping of standards from one weekend to the next if he does shuffle.

Assuming he opts to go with RG Snyman and Lood de Jager as his initial premier pair in the competition – a pretty good likelihood, though not cut and dried – he will get the perfect blend of great height for lineout and kickoff-receipt purposes, as the former is 2.06m and the latter 2.05.

These guys come down from the skies with ice particles in their hair, as they say.

But both also have ample muscle for the graft requirements at close quarters and unusually mobility for such large beasts, too.

Then the immediate back-up crew isn’t exactly shabby: Jason Jenkins is still only 22 but well over 120kg of grunt and dynamic driving potential, and the bolter for the 2018 season could be another youthful figure, Ruben van Heerden.

That surname alone – remember the legendary meanie, “Moaner”? – is enough to get more veteran members of the Loftus faithful freshly excited about a second-rower.

Van Heerden, 20, could be set to take Super Rugby by storm this year, even if he starts a little lower on the impressive Bulls lock “grid” than one or two others at first.

He has a big ticker, as they say, to go with his generous frame, and is renowned for a high tackle count.

Throw in Aston Fortuin, the raw No 5 who models himself on Victor Matfield, and the Bulls have all bases covered in this area.

Perhaps you’ll feel my rating of the Lions’ cupboard at lock is a touch lower than it should be.

Fair enough, but a good part of my rationale is the mounting concern I have that their almost undisputed figurehead in the department - that amazing, ceaseless workhorse Franco Mostert – will gradually pay a price for his negligible off-seasons.

Springbok Mostert, 27, is one of several Lions players who “doubles” his rugby year by committing to stints in the Japanese Top League … something that is probably less physically and mentally taxing if you are a backline player.

But engine-roomers need their rest, and stalwart Mostert will have to monitored very carefully for signs of fatigue or wear and tear as the Super Rugby 2018 season develops; the last thing Swys de Bruin will want is his “Mr Reliable” breaking down for a significant period of time.

Expect burly Andries Ferreira – always happy to hit a ruck or contribute to concerted mauling -- to be the chief candidate once more for the “front” lock task, where Lourens Erasmus is also a willing option.

Marvin Orie ought to be Mostert’s main back-up as a No 5; he brings a level of aggression that belies his reasonably economical, rangy physique, but he does need to keep his discipline in check at times; he never seems too far away when there is argy-bargy …

Given the fillip of selection for the Sharks’ captaincy duty in Super Rugby this year, expect big Ruan Botha to seek a really definitive personal year in 2018.

The former Stormers and once world title-winning SA under-20 player earned just a taste of senior international duty last season when he was a Euro tour squad replacement for injured franchise colleague Jean-Luc du Preez.

He remains very much thereabouts for a Test cap, you’d think, even if the second row is one area where the Boks don’t labour for options in either berth.

Botha, 26, has his third Super Rugby campaign in Durban, and there are attractive candidates to have alongside him at No 4: the talented Stephan Lewies, a one-cap Springbok in 2014, or Tyler Paul, the utility recruitment from the Kings last season.

The 23-year-old doubles as a flanker, but with his 1.94m and 110kg, should see generous service in the Sharks’ second row as well, and is an intelligent customer who seldom goes AWOL for work rate.

Jean Droste is another versatile forward bubbling under for the Durban side, and spring-heeled (if a tad lightweight in appearance) Hyron Andrews, still developing at 22, covers for Botha in the middle-of-lineout capacity.

The Stormers are another outfit for whom I would be inclined to provide a more generous rating but for immediate circumstance.

That “circumstance” is the fact that key enforcer and truly world-class front-five man Eben Etzebeth doesn’t get to start the season due to injury.

Etzebeth is only expected back after the first three months or so of the campaign -- a long wait for such a core member of the Newlands plans since 2012.

So that’s why the slight downgrade for the Stormers in second-row scorecard here, even if the muscular meanie should resurface at a handy time, near the business end of activity.

At least there’s still Etzebeth’s Bok colleague Pieter-Steph du Toit for comforting experience and mettle in the No 5 slot; the blond figure should be highly motivated to freshly nail down that ticket at international level despite his rising possibilities as a blindside flanker for SA.

He is the sort of player who won’t want to somehow be caught betwixt and between.

Otherwise, the primary back-up at lock for the Stormers will come from rangy JD Schickerling and consistently industrious Chris van Zyl, both of whom featured strongly in Western Province’s ascent to the Currie Cup crown last season.

There were cameos of promise from Jan de Klerk in the 2017 Super Rugby campaign, whilst the Stormers can also call on former SA Schools captain Salmaan Moerat if they feel a need at some stage to blood a complete rookie. 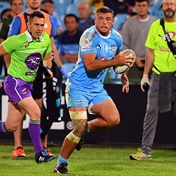