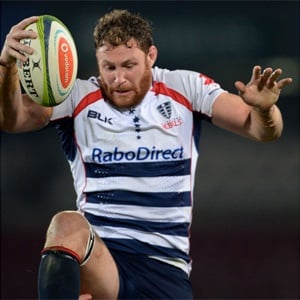 Cape Town - The Reds have announced that veteran number eight Scott Higginbotham has been appointed as their captain for the 2018 Super Rugby season.

The 31-year-old will be the 117th captain to lead Queensland in its 136 years of representative Rugby.

Higginbotham is one of the most experienced members of the current squad, having played 123 Super Rugby games and 34 Tests for Australia. He is also the most prolific try-scoring forward in Super Rugby history.

He said he was honoured to take on the role.

“I'm very honoured to captain the Reds. Being appointed to this position by someone such as Brad (Thorn) means a great deal to me,” Higginbotham told the Reds' official website.

“It's great to lead such a young, exciting and positive bunch of blokes. I’ve had the privilege of being captain of another Super Rugby team, and that experience will help me now.

“I’m also privileged to have the support of other strong leaders in the team, like Samu (Kerevi) and James (Slipper) who have done the role previously. That is only going to strengthen our side.”

Reds head coach Thorn believes Higginbotham is a player who would galvanise the group through his actions.

“Scott is a player who leads by example," he said.

"He’s a humble guy who works hard and strives to get the best out of himself and everyone around him.

“He has experienced success at the Reds previously, but returned to Ballymore ahead of the 2017 season because he felt he had something to contribute to Queensland’s future success and it’s clear to everyone how much he cares about this place.

“He’s also a smart Rugby player in good form and he has the respect of his team-mates.

“It’s also important to acknowledge the good work done by James (Slipper) as captain over the last three years and Samu (Kerevi) in the role of stand-in captain last season. They’re still leaders within the group and will provide plenty of support to Scott.”

Higginbotham made his debut for Queensland in 2008 and went on to play 65 games for Queensland, including a key role in the side’s Super Rugby triumph in 2011.

The 2018 season will be Higginbotham’s second since returning to Queensland, after three seasons with the Melbourne Rebels, including two as captain, and two in Japan’s Top League.

He returned to Ballymore briefly during this period to contribute to Brisbane City in their undefeated run at the National Rugby Championship title in 2015.

The Reds’ will play the first of three pre-season fixtures this Friday 2 February with an intra-squad opposed training session at Ballymore Stadium.

We live in a world where facts and fiction get blurred
In times of uncertainty you need journalism you can trust. For only R75 per month, you have access to a world of in-depth analyses, investigative journalism, top opinions and a range of features. Journalism strengthens democracy. Invest in the future today.
Subscribe to News24
Related Links
Du Preez starts at flyhalf for Sharks
Blitzboks pooled with Scots for Commonwealth Games
All Blacks legend Carter hints Japan will be last hurrah
Next on Sport24
Western Force snatch victory in Melbourne as Rebels pay for missed chances