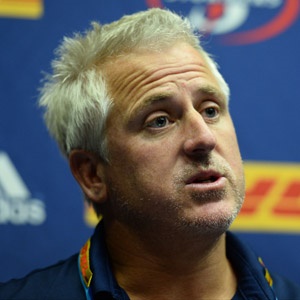 Cape Town - An eligibility ruling earlier in the week has denied Stormers coach Robbie Fleck the use of utility back Scott van Breda from the bench, but judging from what he has been saying in the build-up to Saturday’s Newlands Super Rugby quarter-final against the Chiefs, he may not have used him anyway,SuperSport.com reports.

Fleck used a six/two split between forwards and backs when he chose his match-day squad for the recent match against the Rebels in Melbourne.

The Stormers struggled at times that day and were behind early in the game, but it was the bench, and mainly the intensity of the big men with their driving and at the contact points, that won them the match.

They powered away to score more than 50 points for the first time in their history in a fixture played in Australia.

Inevitably there will be speculation about how the Stormers will approach Saturday’s game. There’s an ongoing debate and clamour in the Cape for the Stormers to play a crowd pleasing style.

But what the Stormers have got right this year is their ability to play what is demanded on the day. Their good win over the Brumbies, when they employed a kick attack strategy, was a case in point.

They also showed pleasing adaptability, possibly down to the experience of Schalk Burger, when they beat the Western Force in the wet in Perth.

The Stormers were being caned by the Force’s kicking game in the first half, but a switch in tactics, resolving to get the forwards to hold onto the ball more, brought good results.

It may well rain at Newlands on Saturday, with the latest forecast predicting a 60 percent chance of showers in Cape Town in the earlier part of the day.

Some recent Chiefs matches against South African opposition suggest that could be good for the Stormers if they get their game right.

Cast your mind back to Kings Park last March. It didn’t rain the whole game, but it rained enough during the clash between the Sharks and the Chiefs for it to impact, particularly later on when the Chiefs would have been expecting to lift their intensity.

The Chiefs had Liam Messam sent off early, but the Sharks lost both Bismarck du Plessis and Frans Steyn. The Sharks won narrowly.

They lost narrowly in this year’s game in Hamilton, but they came a lot closer to winning than many expected them to.

Again, it was a wet and slippery night, and the match will be remembered for the Chiefs’ conservative tactics as they simply held onto the ball in the second half in the correct assumption that if they did that, they couldn’t lose.

It was mostly strong defence and ability to feed off and make the most out of their opposition's mistakes that won the Lions their match against the Chiefs in Hamilton four and a half months ago.

The Chiefs were transitioning at that early stage of the season and are a different proposition now.

The Stormers’ big strength these days is at forward, particularly the tight five, and the driving of the pack, with Eben Etzebeth and Pieter-Steph du Toit in the vanguard, was what killed the Australian challenge in the two matches overseas.

The Stormers won’t find a Kiwi side as easy to beat with that approach, but it is probably their best hope. And wet conditions will increase their chances.

Unlike the Sharks and the Lions, the Stormers haven’t played a New Zealand side this year, so they don’t have much to go on when it comes to determining the game they play.

The Sharks were more competitive against Kiwi opposition with their more conservative approach – they never had any 50 point blow-outs like the Lions did - but the Stormers may well be advised to engage their memories to recall what worked for them in the past.

And that is perhaps what Fleck has done, and why a six/two split looks likely. It’s been a while now since the Stormers beat a top New Zealand team, but they made a habit of it at times in the period between 2010 and 2012, when domination of the contact points was their key to success.

Rather than having to choose between the more subtle finesse-based skills of Nizaam Carr and the physicality of Rynhardt Elstadt for the back-up loose-forward position on the bench, Fleck can play both together.

That way he has Carr to inject some pace and attacking continuity to the Stormers challenge should it open up late in the game, and he also has the power hits and contact point aggression of Elstadt to call on.

Actually, before his injury Carr wasn’t doing badly at all at the breakdown in his new role then of specialist openside flank, so it is going to be interesting to see how he is used in the playoffs now that Sikhumbuzo Notshe has settled so well into the starting team as the wearer of the No 6 jersey.

The Stormers team is to be announced at lunch time on Thursday and it is anticipated that Fleck will go for Robert du Preez, who began the season as the first choice Stormers flyhalf, in the No 10 jersey with Brandon Thomson continuing in his bench role.

Read the story on Sport24

Related Links
Can SARU help save sinking Kings ship?
Bulls: We can turn WP flyhalf into a star
WP lock to join Rassie at Munster
Share
Next on Sport24
How did the Blues become so good and what can SA teams learn?