Cape Town - All Black scrumhalf TJ Perenara is the latest high-profile rugby player to voice his concern at Israel Folau's comments on homosexuality.

Folau, not for the first time, caused a stir earlier in the month when he suggested that gay people were destined to go to hell.

His comments caused outrage in the rugby community with the Waratahs taking disciplinary action against the Wallabies fullback.

On Tuesday, Chiefs scrumhalf Brad Weber took to Twitter to voice his disgust at Folau's comments while, on Thursday, Perenara had his say.

In a series of tweets, Perenara encouraged young individuals struggling with their identity to be themselves.

"There is no justification for such harmful comments," he wrote.

I’d like to add my voice to the conversation currently taking place. As professional rugby players, whether we like it or not, we are role models for a lot of young people. Notably, young Maori and Pasifika people.

You don’t need to look far to know that young Maori/PI are overrepresented in youth suicide statistics and, as I understand it, even more so when you look to those who are part of the Rainbow community. Comments that cause further harm cannot be tolerated.

Let it go on record that I am 100% against the comments that were made by Israel. It was not ok to say that. It’s not an attitude I want to see in the game I love. There is no justification for such harmful comments.

To anyone, young Maori/Pasifika people especially, who may be struggling with their identity - please know that it is ok to be you. You are perfect as you are. Do not let these comments keep you from being yourself. Polynesia has been sexually diverse since forever.

Related Links
Sharks preparing for Stormers onslaught up front
Ex-Bok: Jake White's plan is sharp, but it's racist...
Waratahs name side for 'extremely physical' Lions
Share
Next on Sport24
Springbok pedigree key for Stormers in win over Lions 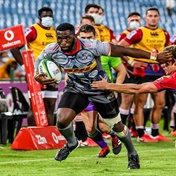