The Blues were up against it for large parts during their win over the Highlanders at Eden Park, with the men from Dunedin squandering several chances late in the game.

The hosts led 22-10 at the break but found themselves trailing 24-22 midway through the second stanza before showing composure in closing the game out.

And it was that composure that Blues captain Patrick Tuipolotu spoke about in his post-match interview, admitting that this time last year they would in all likelihood have lost a similar type of contest.

He lauded their defence under pressure and said the players would welcome a bye next weekend.

The Blues have been New Zealand's whipping boys over the last decade, but there are signs of a resurgence in 2020.

Saturday's win was their seventh straight overall, and their position atop the Super Rugby Aotearoa table will give long-suffering fans hope.

The Highlanders will feel they let an opportunity slip at the end of their three-point defeat to the Blues.

Flyhalf Mitch Hunt missed a relatively tough penalty inside the final 10 minutes, but the Otago franchise had another chance to draw level when they won a penalty in close range with little over two minutes remaining.

However, this time they turned down the opportunity at three points and opted for an attacking lineout from which they were unable to score.

The sensible option would have been to take the easy three points on offer and settle for a draw.

There is after all the new regulation where drawn matches allow for an extra-time period of 10 minutes with the first team to score points claiming the spoils.

Blues wing Caleb Clarke was their standout player in the win over the Highlanders.

The 21-year-old scored a try, set up another and his line breaks were reminiscent of his father Eroni Clarke, who played in midfield for the strong Auckland Blues side that won Super 12 in 1996 and 1997.

It was also an emotional day for the young Clarke, who dedicated his try to his grandfather, who passed away just hours before kick-off.

"Just wanna give all the honour and glory back to God. That was dedicated to you Grandpa" - Caleb Clarke, our MVP ?? pic.twitter.com/8O8JU9GY29

It's fair to argue that playing the Crusaders in Christchurch is the toughest provincial match in the world and the Chiefs were the latest team on the receiving end.

The narrow 18-13 win was the Crusaders' 35th straight victory at Orangetheory Stadium - their last home defeat was a 35-10 reverse to then champions the Hurricanes on 16 July 2016.

The Crusaders are not 10-time Super Rugby champions for nothing and it will take a brave man to bet against them winning the inaugural edition of Super Rugby Aotearoa.

Pressure getting to Chiefs coach

Chiefs coach Warren Gatland was not a happy camper after their loss in Christchurch.

It was their third straight defeat to start the tournament and leaves the men from Hamilton rooted to the bottom of the standings.

The Chiefs eventually cleared the ball, only for flyhalf Aaron Cruden to flick it into touch.

Crusaders wing Sevu Reece opted for a quick throw-in to send the speedy fullback Will Jordan away for a try and a 15-3 lead after 46 minutes.

"We were furious because we just felt the breakdown before it... we felt Goodhue should have been penalised. To me, it was a tough decision, and then for them to take a quick throw and us not to react to it,'' Gatland lamented.

The pressure is clearly getting to Gatland and it's a far cry from the Chiefs team that started the normal Super Rugby season with three straight wins. 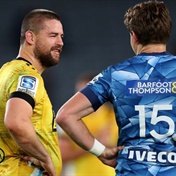