The former All Black was relieved from his duties on Monday, with the Hurricanes saying the decision was made due to "the financial uncertainty created by Covid-19".

"He's a top man and a top coach and it's not the ideal situation, but like a lot of places around New Zealand at the moment with Covid, it's a necessity. Unfortunately, that's the way it is, and we'll be connecting with 'Los' (Spencer) a lot over the next few days and weeks," Holland told the official Super Rugby NZ website.

The Hurricanes agreed that Spencer's contract would finish early, meaning his services are no longer required for the Super Rugby Aotearoa competition.

With Spencer gone, Holland will have a heavy workload for the remainder of the competition. The other assistant coach at the Hurricanes is forwards guru Chris Gibbes.

"We'll rejig a few things and I'll get a bit more involved in the hands-on stuff with rugby and some of the stuff above me gets taken care of. It's going to be a little bit of working through, but we’ll be fine," Holland added.

"We'll lose his imagination around things, he's awesome with his work ethic around helping the boys out with a lot of their skills, so it's a big loss. But when you look around the country, there are a lot of people suffering big losses at the moment."

Holland added that they were going into a massive unknown, not knowing whether they’ll be able to re-employ another coach again next year.

"We don't even know what the comp will look like. We are just striving on looking to get the job done week to week without worrying too much about it at the moment. But the reality is we don’t have too much certainty."

The Hurricanes are desperate for their first win of Super Rugby Aotearoa, having lost to the Blues and Crusaders before their bye week.

They tackle the Chiefs in Hamilton on Sunday (05:35 SA time). 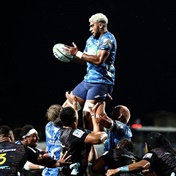