Canan Moodie, given his famed maturity already as a 19-year-old, isn't afraid to seek out the wisdom of his veteran teammates.

In fact, the gifted Bulls winger's meteoric rise to Springbok stardom can be partly attributed to him having grizzled former national utility back Lionel Mapoe as his roommate ahead of his Currie Cup debut against Western Province in January.

"It's definitely been the culmination of many guys giving me some form of advice. But I have to say that Lionel was the first," said Moodie, ahead of his return to the Bulls' URC squad for Friday's meeting with Connacht at Loftus.

"He was my first roommate ahead of that game and it was really great having him around. He's very cool and told me from the outset that I simply needed to stay calm and really not try to overthink things. It was about focusing less on the game itself and just letting the process run.

"Don't do anything special. Just do the work and the rest will come. I found much value in that."

Ironically, Moodie capped that performance with a try.

Seven months later, as the beneficiary of a severe injury crisis at right wing in the national camp, the youngster from Paarl became the second youngest Bok debutant since readmission.

Naturally, he sought out the man who holds that record, Frans Steyn, for some advice, even if the legendary 35-year-old isn't a man of many words.

"He just told me to keep on doing what I'm doing. I appreciated that he realised I'm coming into a setup that has a lot of experienced World Cup winners in it and said that I shouldn't be overwhelmed. They wouldn't have picked me if I didn't belong here," said Moodie. 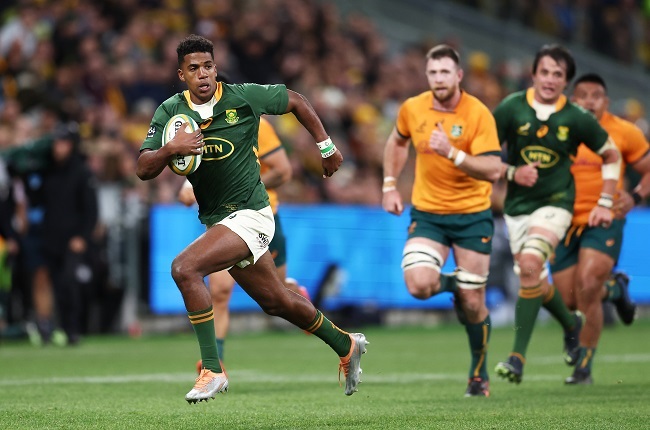 True to form, relatively speaking, he emulated his exploits of the Currie Cup by scoring a try on Test debut too, a brilliant grab out of the air from a sleepy Marika Koroibete.

"I personally thought the kick forward by [Bok scrumhalf] Jaden [Hendrikse] was a tad too far. Yet as we know, if you play at wing for the Boks, you're expected to follow up on kicks," said Moodie.

"But I just still went full-out for it and Marika probably didn't expect me to get there. I grabbed the ball and there was an open tryline in front of me.

"It was an unbelievable feeling to score that try."

Ironically, despite his ripe young age and the admission that he was much to learn still, Moodie returns to Loftus now as a proverbial marked man that's usually far older than he is.

He's ready for that challenge.

"That's the big focus now. I have to show everyone that I play like a national player now and with that comes greater responsibility," said Moodie.

"Opponents will now keep an eye on me and analyse my play more thoroughly. They're not going to make it easy for me."