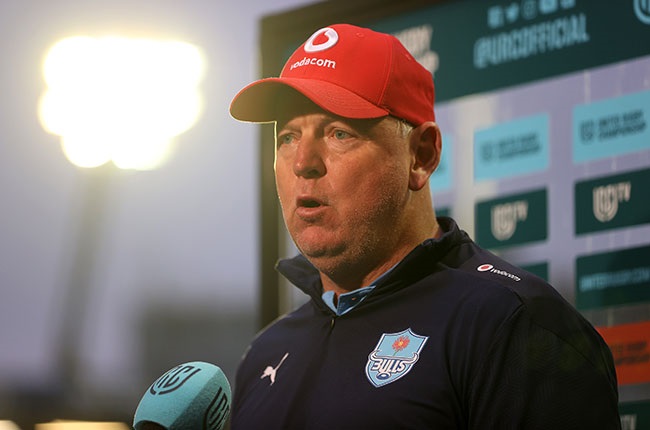 Jake White and his Bulls aren't wary of having 28-year-old Welsh referee, Adam Jones, in charge of their United Rugby Championship meeting with Zebre in Parma on Friday night.

In fact, he's actually keen to have his charges exposed to an overseas arbiter again following a host of local derbies that have been accompanied by, in general, the same group of local referees.

Jones has 14 URC matches under his belt to date.

While South African teams have undoubtedly struggled to adapt to the interpretations of northern hemisphere officials to date, White argues that it's currently preferable than to start suffering from what can, crudely, be labelled as "SA referee fatigue", much like Covid or bubble fatigue.

"I'm quite interested to see how it goes with a foreign referee," the Bulls' director of rugby said on Thursday.

"We've probably, through no-one's fault, had the same (local) referees over and over in different competitions over the past two years, whether it's been the Rainbow Cup or Currie Cup or Super Rugby Unlocked. We've been stuck with the same 5,6,7 referees.

"I'm looking forward to getting a different interpretation and keen to see how we play and how the game shapes. Like I said, it's absolutely no-one's fault, but we've become a bit stagnant just have the same persons reffing us week-in and week-out."

That doesn't mean the Bulls haven't felt the bouts of frustration that every other side has when it comes to some on-field decisions.

"All coaches have been frustrated by certain calls that have been made," said White.

"There's no difference between any coach in that regard. Coaches see things in a different way (to the refs). Things probably haven't worked out in our favour. Of course there have been calls that could've changed the outcome or at least flow of a game.

However, the Bulls' lowly current placing on the URC log and the need of them to start showing signs that they are indeed as competitive as their recent dominance on the domestic circuit suggests means they now simply have to front up.

Overall improvement won't be forthcoming without it.

"Hopefully, we'll be tasked with playing in a different way in this match against Zebre. We've been trying to find a way by which we can improve in the URC and hopefully the referee allows us to play in this new way," said White.