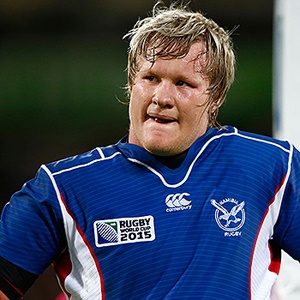 London — Namibia No 8 Renaldo Bothma was suspended for two weeks after admitting on Friday to making a dangerous tackle in the 17-16 loss to Georgia at the Rugby World Cup.

That means he will be withdrawn from the reserves for his team's last Pool C match against Argentina in Leicester on Sunday.

Bothma received a yellow card for tackling flyhalf Lasha Malaguradze around the neck and then yanking him down in the build-up to Georgia's first try of the match in Exeter on Wednesday.

Following a hearing, he was suspended by judicial officer Alan Hudson of Canada.

With respect to the sanction, Hudson deemed the tackle merited a low-end sanction of two weeks, and added one week to deter dangerous play. Then he took into account Bothma's conduct, remorse, character and clear disciplinary record.

In the context of the World Cup, one week equates to one match. After the tournament, the suspension reverts to weeks, meaning Bothma misses one match for his club side Toyota Verblitz in Japan, and is free to resume playing on November 15.

Meanwhile, Samoa winger Alesana Tuilagi appealed against his five-week ban for striking a Japan flyhalf Harumichi Tatekawa with his knee in the second minute of their game last weekend in Milton Keynes. His appeal hearing was on Friday.

Samoa are out of contention for the quarter-finals ahead of their Pool B closer against Scotland in Newcastle on Saturday.

Also, Nick Blevins was cited by independent citing commissioner Yves Thieffine of France for a dangerous tackle against Romania on Wednesday. His hearing is also in London.