Paris - Misfiring France have ditched veteran centre Mathieu Bastareaud in their bid to accelerate their game and "catch up" with international rugby's top sides in time for the Rugby World Cup.

Heavily-built Bastareaud, 30, has won 54 international caps since making his debut in 2009 but has been dropped by Jacques Brunel and his refreshed backroom staff which includes future head coach Fabien Galthie as a consultant.

He has been a mainstay in Jacques Brunel's starting line-up since the beginning of the former Perpignan coach's tenure in 2018, starting all but four Tests out of 16.

But Bastareaud's international future now looks bleak, not least with him departing to US side Rugby United New York on loan for a season from Toulon in February.

"It wasn't possible for him to make up the difference. We only have two months and very little time," 65-year-old Brunel said, with France currently sitting eighth in World Rugby rankings.

"There are gaps in the criteria which we saw from our data which are important. So we decided to take the guys who appear best adapted to catch up with this delay."

Clermont scrumhalf Morgan Parra, a proven goal-kicker with 71 caps, will also not make the plane for Japan. Brunel had also dropped him after February's 44-8 hammering at the hands of England.

"We're behind with our movement on and off the ball and our ability to get up and go again off the ground," Brunel said.

Bastareaud was named captain under Brunel in his fifth game in charge against Wales in February 2018, deputising for regular skipper Guilhem Guirado who was suffering from a knee injury.

"Obviously it was a difficult choice as it's been a year and a half that Mathieu has been with us on a regular basis," Brunel said.

"We have other players with experience, who are old heads, like Maxime Medard or Yoann Huget," he added.

Both Medard and Huget were members of Toulouse's Top 14-winning side this season and they each have more than half-a-century of Les Bleus matches under their belts.

The four midfield spots in the squad are taken by Gael Fickou, Geoffrey Doumayrou, and Top 14 finalists Wesley Fofana and Sofiane Guitoune.

Bastareaud, who won three successive European titles with his club, struggled as the former giants laboured both domestically and in the Champions Cup this campaign.

"In his position there is a lot of competition who showed a lot of quality throughout the season," Brunel said.

"The (selection) criteria is fundamentally linked to our preparation and ambition to play a game where movement on and off the ball is the priority."

Les Bleus start their campaign against Argentina on September 21 before facing the USA, Tonga and then England in what promises to be a tough Pool C. 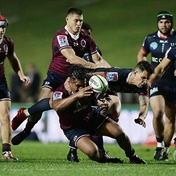