Paris - Bordeaux-Begles lock Julien Ledevedec will serve a two-week ban for a headbutt in his team's 28-10 European Champions Cup defeat by Clermont.

Ledevedec was handed a straight red card for his act against Paul Jedrasiak during the game, just minutes after he'd come on as a replacement.

The lock will now be able to play again on January 25, so missing the last two European group games for Bordeaux, who stand last in their Pool 2 with just six points and one victory from their four games to date. 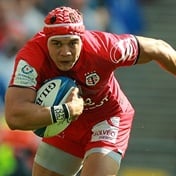