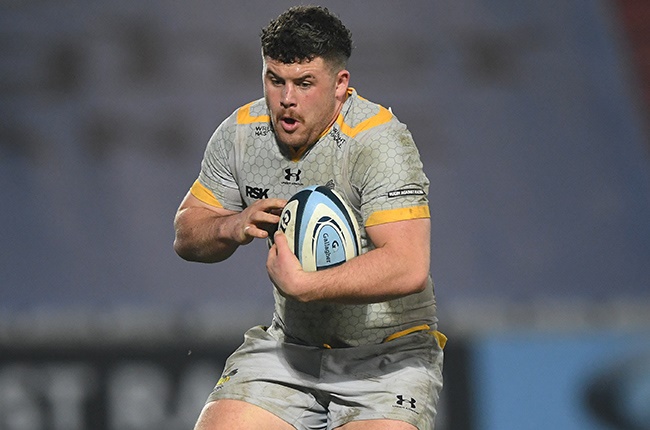 England coach Eddie Jones believes Alfie Barbeary has the mentality as well as the talent to make his mark on international rugby after calling the Wasps back-row into his training squad for the Six Nations Championship.

The 21-year-old Barbeary was one of six uncapped players included in a 36-man party announced by Jones on Tuesday, with veteran playmaker Owen Farrell restored to the captaincy despite a lack of game time following ankle surgery.

But amid the Australian boss's freshening up of his squad ahead of the 2023 Rugby World Cup in France, it is Barbeary who appears to have the best chance of making his Test debut in a Six Nations that begins for England at oldest rivals Scotland on 5 February.

Barbeary has been in fine form for Wasps this season, including a man-of-the-match display against European champions Toulouse on Saturday.

His rise is all the more impressive given Barbeary started his career as a hooker before moving to No. 8, a position that traditionally places greater emphasis on speed and mobility than set-piece skills.

"He's got an extraordinary ability to break tackles and carry the ball forward in close contact."

The former Australia and Japan coach added: "Talent is important but it's the mentality of then working really hard, adding to your game and getting yourself to the fitness level you need to have to play in the hardest moments in the game. We're confident he's got the mentality to do that and now we're putting the opportunity in front of him."

Asked if he had had any influence upon Barbeary's career-changing positional switch, the 61-year-old Jones replied: "Not a lot, to be honest. I caught up with him in Coventry (the Midlands city where Wasps are based) and had a chat to him.

"The decision has to be his. I suggested he went away and talked to the person he trusts the most, then make a decision about where he feels his future is. He came back three or four weeks later with the back-row."

England finished a lowly fifth in last season's Six Nations before enjoying an unbeaten November campaign that included a victory over Jones' native Wallabies and ended with a dramatic 27-26 win over world champions South Africa.

Having seen his England team lose to the Springboks in the 2019 World Cup final, Jones' overriding goal is to go one better in France next year.

But with England fast bowler Stuart Broad accusing his team management of putting too much emphasis on long-term planning rather than winning the game in front of them during their recent 4-0 Ashes series loss in Australia, lifelong cricket fan Jones knows it is a difficult balance to strike.

"That comes down as a judgement," said Jones, who took charge of England following their embarrassing first-round exit on home soil at the 2015 World Cup.

"I feel like we are in a really good position to use the next two years to establish a team that can challenge and win the World Cup in 2023.

"To me, it is always about looking after now, but you've always got to have an eye to the future. And it's a judgement call, there's no science to tell you this is right, this is wrong, and we feel like we're in a good position."

We live in a world where facts and fiction get blurred
In times of uncertainty you need journalism you can trust. For 14 free days, you can have access to a world of in-depth analyses, investigative journalism, top opinions and a range of features. Journalism strengthens democracy. Invest in the future today. Thereafter you will be billed R75 per month. You can cancel anytime and if you cancel within 14 days you won't be billed.
Subscribe to News24
Next on Sport24
Rassie Erasmus' days as 'water boy' over as World Rugby trials new regulations