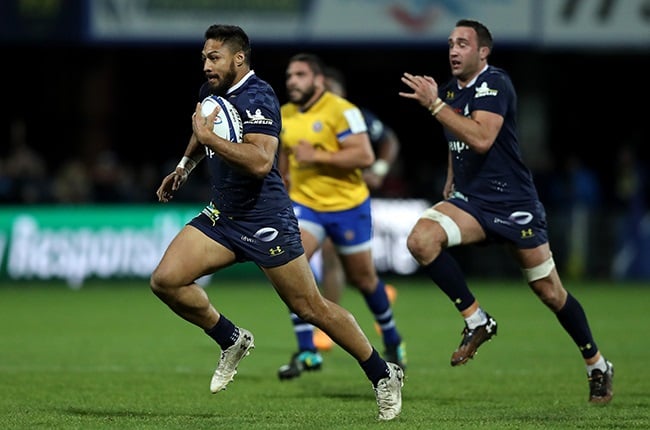 Clermont's ex-All Blacks centre George Moala admitted to having had a difficult six weeks sidelined with a head injury ahead of Saturday's trip to Bristol Bears in the opening round of the European Champions Cup.

Moala, 30, won the last of his four Test caps for New Zealand in 2016 and has played just three games since suffering the original problem in a Top 14 game at Bayonne in September.

In a potential landmark case concerning brain injuries in professional rugby union, England World Cup winner Steve Thompson was among a group of ex-internationals who on Tuesday announced they were planning legal action against rugby authorities over lack of protection from the risks caused by concussion.

It is an issue that clearly chimes with Moala.

"It was pretty tough. It's impacted me mentally a lot. I was going through a lot of memory loss," Moala told AFP of his own head injury.

"I would talk to my partner and she would say 'You just said that'. That's when it really hit me. I wasn't just thinking about my career, but I was thinking about kids after rugby.

"I'm so happy and grateful that I'm back to normal but to be honest I went through some dark times. It's a big deal."

Moala's Clermont side are third in the Top 14 and head to England to face a Bristol outfit without star Fijian back Semi Radradra after he sustained a dead leg on Test duty last weekend.

"They're not just Semi. They have Siale Piutau at centre, he's a great player too, he's been playing awesome," Moala insisted.

"I thought they were another Pacific team! It will be weird because I've never played against Steven before," Moala said.

"I haven't really followed Steven in the UK, but back home he was always a natural leader, that guy, the voice for the team. I knew he would carry that with him, regardless which team he was going to go to."

Clermont are three-time runners-up in Europe and last season were knocked out in the last eight by French rivals and eventual losing finalists Racing 92 - a game Moala missed due to his head injury.

This season's competition has been shortened because of the coronavirus pandemic, with each club playing four pool matches (instead of six) with the top four from each of the two groups advancing to the next round.

"It was pretty gutting to lose in the quarters," Moala said of Clermont's abrupt end last season.

"We did really well and then the competition came to a halt and this season I didn't get to play in the quarters.

"But the beauty of it is another season, another opportunity to go again. There's a lot of excitement around the boys and they know it's a big deal."

We live in a world where facts and fiction get blurred
In times of uncertainty you need journalism you can trust. For only R75 per month, you have access to a world of in-depth analyses, investigative journalism, top opinions and a range of features. Journalism strengthens democracy. Invest in the future today.
Subscribe to News24
Related Links
5 things Sharks must get right to halt rampant Bulls
Bok centre hit with 4-week ban
WP coach responds to player exodus rumours: 'Siya to Sharks thing is just smoke'
Next on Sport24
All Blacks, France clash in heavyweight 2023 Rugby World Cup opener