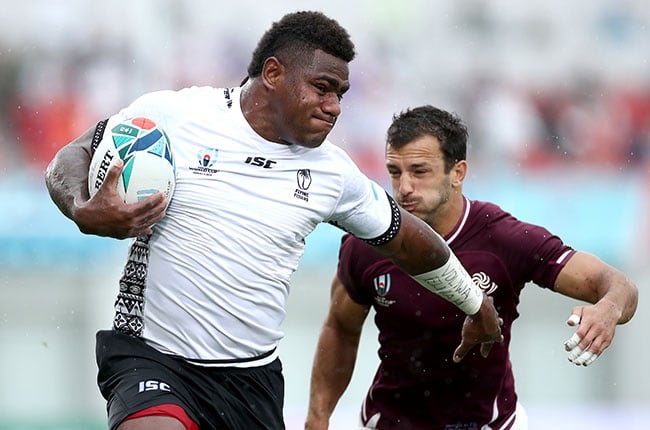 Josua Tuisova in action for Fiji during the 2019 Rugby World Cup in Japan.
Cameron Spencer/Getty Images

Lyon centre Pierre-Louis Barassi said Josua Tuisova was an "animal" after the Fiji winger scored three tries in the 62-10 hammering of Bayonne at home in the French Top 14 on Sunday ahead of next month's Autumn Nations Cup.

Tuisova claimed a first half double before dotting down his third in the closing minutes to join South Africa's Cheslin Kolbe at the top of the league's try-scoring charts with five efforts this season.

Earlier this week, Tuisova was named in the Pacific Islanders' squad for the international tournament which begins on November 13 and is set to miss three club games due to the Test matches.

"He's an animal, he's such a good player. Honestly he puts us on the front foot all the time," one-time France international Pierre-Louis Barassi told broadcaster Canal Plus.

"We wanted to play quickly with our style. We can smile after today's win," he added.

Tuisova's side move up to fifth place in the table before heading to record 20-time champions Toulouse next weekend as the Basque side drop to ninth after their second straight defeat.

Hooker Mickael Ivaldi, midfielder Barassi and scrumhalf Baptiste Couilloud crossed along with Tuisova during the opening 40 minutes for the home side.

Couilloud added a second before Toby Arnold, Colby Fainga'a and also Noa Nakaitaci went over in the second half as Tuisova clinched his hat-trick with four minutes to play.

Later Sunday, Clermont moved above Lyon into fourth place after a 41-27 rout of Stade Francais.

It was a third home win of the season for Clermont at their Marcel-Michelin ground to follow a 33-30 victory over Toulouse and 31-20 triumph over Agen.

Only Racing 92 in the European Champions Cup have managed to get the better of Clermont on their home patch.

We live in a world where facts and fiction get blurred
In times of uncertainty you need journalism you can trust. For only R75 per month, you have access to a world of in-depth analyses, investigative journalism, top opinions and a range of features. Journalism strengthens democracy. Invest in the future today.
Subscribe to News24
Related Links
All Black Perenara to play next season in Japan
AB a 'freak', Wenger misses 'drug' of coaching: Who said what in sport this weekend
Wallabies slammed for 'avalanche of mistakes'
Next on Sport24
Cheetahs set to lose 2 more players to European clubs