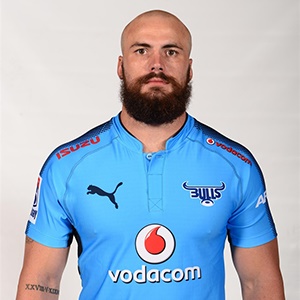 Former Bulls flank Shaun Adendorff is reported to be close to finalising a move to the Northampton Saints.

According to The Rugby Paper, the 27-year-old is at an "advanced stage" in talks with the Saints as his current deal with French Pro D2 side Aurillac is set to expire at the end of the season.

Adendorff, who starred for the Junior Boks in their 2012 Under-20 Championship victory in South Africa, will find a move to England and earning pounds no doubt a lucrative business with the exchange rate at £1/R23.26 as of Tuesday morning.

Adendorff, who also made two appearances for the Blitzboks, had two separate stints with the Bulls and also enjoyed time at the Boland Cavaliers before moving to France in 2018.

We live in a world where facts and fiction get blurred
In times of uncertainty you need journalism you can trust. For only R75 per month, you have access to a world of in-depth analyses, investigative journalism, top opinions and a range of features. Journalism strengthens democracy. Invest in the future today.
Subscribe to News24
Related Links
Fine SA Super Rugby vintages | The 'Amaze-Bulls' 2007-10
Former Springbok coach Coetzee leaves Japanese club
Daily shot of Express-o - MyTwoCents
Next on Sport24
Silky Sintu Manjezi can add panache to an already firing Bulls set-piece