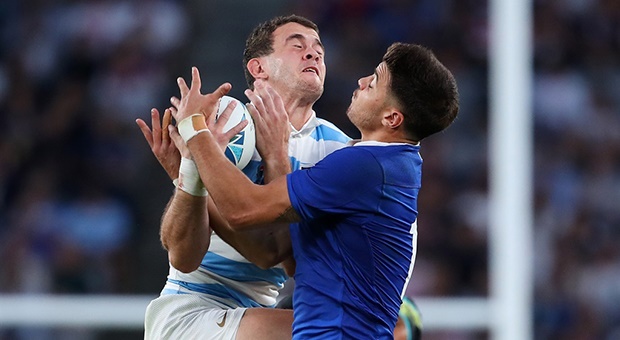 France's coronavirus-hit Six Nations squad will receive a much-welcome boost this weekend with the expected return of flyhalf Romain Ntamack for league leaders Toulouse in their Top 14 match against Brive.

Ntamack has been out since late December with a double jaw fracture, but resumed club training last month with the wider goal of playing his part in the rest of France's Six Nations campaign.

The 21-year-old missed France's first two games of the tournament, an opening 50-10 victory over Italy and a hard-fought 15-13 win over Ireland.

Ntamack's comeback could be perfectly timed as France's third-round match against Scotland was postponed after a Covid-19 outbreak among the squad, including coach Fabien Galthie, three other backroom staff, captain Charles Ollivon and 11 other players.

The French are now looking at a fourth-round match away against England on March 13, followed by Wales at home a week later, with the Scotland game possibly re-arranged for March 26.

Ntamack's place at Test level has been taken by Matthieu Jalibert, who has amassed 20 points in the opening two matches, but there is no doubt the gifted Toulouse playmaker would be welcomed back into the international fold with open arms by Galthie should he prove himself match-fit.

"It was an injury that allowed him to train physically quite easily as it didn't stop him running."

South African World Cup winner Cheslin Kolbe stepped in at 10 for Toulouse last week, steering the team to a 14-11 victory over La Rochelle, the host team's first defeat in two years at their Stade Marcel-Deflandre fortress.

Kolbe will likely migrate back to his usual positions of wing/full-back if Ntamack makes the cut for the home game against Brive on Saturday.

"They say sometimes it's good to step out of your comfort zone #10," Kolbe jokingly tweeted after his run-out against second-placed La Rochelle.

France internationals Thomas Ramos and Selevasio Tolofua will also be back in action for Toulouse, having been designated 'contact cases' amid the coronavirus outbreak, but they have self-isolated and since tested negative.

The four Toulouse players to have contracted the virus on France duty - Cyril Baille, Antoine Dupont, Julien Marchand and Peato Mauvaka - will not play against Brive.

Brive took a further step to consolidating their mid-table position with a 25-23 win over Bordeaux-Begles last week, currently on 39 points alongside Castres, who welcome La Rochelle.

The weekend's action in the 18th round of matches in the elite French league kicks off on Friday when fourth-placed Clermont travel to Montpellier.

Clermont have been on fire, coming into the match against the 11th-placed club on the back of having racked up 18 tries in just two matches, against Bayonne (73-3) and winless Agen (52-16).

Toulon host third-placed Racing 92 in Sunday's game, while Bayonne entertain Lyon, Pau are away at Bordeaux-Begles, and lowly Agen target a first league win in 18 attempts at Stade Francais on Saturday.

We live in a world where facts and fiction get blurred
In times of uncertainty you need journalism you can trust. For only R75 per month, you have access to a world of in-depth analyses, investigative journalism, top opinions and a range of features. Journalism strengthens democracy. Invest in the future today.
Subscribe to News24
Related Links
A gaping R8bn hole: What no Lions tour could cost the SA economy
One year on: The icons Covid-19 took from SA sport
Studio v 'Zoom': Why SuperSport walks tightrope
Next on Sport24
Reds edge Brumbies in Brisbane thriller