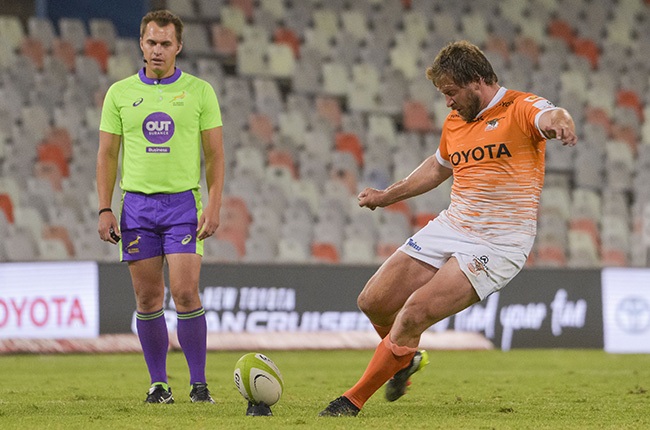 The door on the Cheetahs loaning players to the PRO16 franchises is shut unless the central franchise doesn't participate in a reported Toyota Cup next month.

Hawies Fourie, the Free Staters' director of rugby, reiterated after a 71-12 preparation series victory over Eastern Province that plans are afoot for the team, along with Griquas, the Pumas and the Elephants, to play a competition running concurrently with the Rainbow Cup.

As a result, key players such as Frans Steyn can stake his claim for Springbok selection in the British & Irish Lions series in Bloemfontein.

The 33-year-old midfielder has been continually mentioned as a target for Jake White, the Bulls' director of rugby, under whom he's played extensively previously.

"We've taken the decision that we are not going to loan our players if we're going to play in the other competition," said Fourie.

"If we're keeping busy during April and May, no-one is getting released. However, if we don't have anything scheduled in those two months, we'll think about it."

It would seem anyway that the competition's broader structures are in place and that it's only the finer details that need to be finalised.

"We can't announce anything officially yet, but there are two options," said Fourie.

"Let's make it clear that while the Rainbow Cup was announced last week, there are now always clauses inserted into agreements that mean it might not take place at very short notice.

"That's all down to Covid-19, specifically when protocols and restrictions change so quickly. The pandemic really has changed our world."

Such a gloomy prospect - which would deal a meaty blow the PRO16 franchises' big names with regards to preparing for the Lions tour - would mean that SA Rugby launches a Franchise Cup of sorts just to keep the pot boiling.

"But if the Rainbow Cup does go ahead, we'll be playing in the competition that the governing body is currently working on," said Fourie.

"It should be finalised within the next seven to ten days."

The Cheetahs, who beat the Sharks and Stormers in the preparation series, will take a week's break before assembling again on 8 April.

We live in a world where facts and fiction get blurred
In times of uncertainty you need journalism you can trust. For only R75 per month, you have access to a world of in-depth analyses, investigative journalism, top opinions and a range of features. Journalism strengthens democracy. Invest in the future today.
Subscribe to News24
Next on Sport24
Reds edge Brumbies in Brisbane thriller