Jaque Fourie hangs up his boots 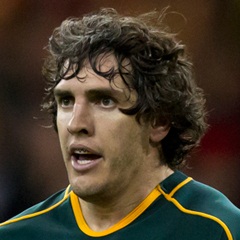 Fourie, 33, confirmed his decision in an interview with Netwerk24, telling the Afrikaans website that he’d like to stay involved in the game as a defence coaching specialist.

Fourie played 72 Tests for the Springboks between 2003 and 2013, with his last Test coming against France in Paris in November 2013.

After that, he made himself unavailable for international rugby and fully committed himself to playing club rugby in Japan, where he first joined the Panasonic Wild Knights in 2011.

He played one season there before signing for the Kobe Kobelco Steelers. He played his last game for the Steelers earlier this month.

Fourie started his career at the Lions in 2003, before moving to the Stormers in 2010.

After Fourie made himself unavailable for the Boks, there were attempts from then-Springbok coach Heyneke Meyer to lure him back into the international fold.

He was to form part of the Boks’ plans in their build-up to the 2015 Rugby World Cup, but those plans fell through.

We live in a world where facts and fiction get blurred
In times of uncertainty you need journalism you can trust. For only R75 per month, you have access to a world of in-depth analyses, investigative journalism, top opinions and a range of features. Journalism strengthens democracy. Invest in the future today.
Subscribe to News24
Related Links
Tuks open Varsity Cup v Maties at Loftus
Lions name squad for Bulls friendly
Rassie: Only seeing is believing
Next on Sport24
Lions philosophical over flawed Currie Cup points system: It is what it is