PICTURES | Sonny Bill a father for the fourth time Cape Town - Former All Blacks star Sonny Bill Williams arrived home in time for the birth of his fourth child, a baby boy.

According to the Stuff website, Williams missed his new club Toronto Wolfpack's Super League defeat to Wigan in order to fly home to New Zealand as wife Alana was due to give birth.

In a photo posted on Friday on social media, Williams is seen holding the child in his arms while dressed in blue scrubs with a red hairnet - while donning a large grin.

"The stress levels aren't as high 4th time around, but the love we have for this child is the same."

The baby, whose name is yet to be confirmed, is the Williams' second son after Alana previously gave birth to Zaid. The couple also have two daughters - Iman and Aisha.

Williams played his 58th and final Test for New Zealand in the 2019 Rugby World Cup bronze-medal match against Wales before signing a NZ$10 million, two-year contract with the Wolfpack.

The Wolfpack are yet to win a match in their maiden English Super League season.

We live in a world where facts and fiction get blurred
In times of uncertainty you need journalism you can trust. For only R75 per month, you have access to a world of in-depth analyses, investigative journalism, top opinions and a range of features. Journalism strengthens democracy. Invest in the future today.
Subscribe to News24
Related Links
WRAP | Super Rugby - Week 3
Lions coach: Physicality is Alberts' X-factor
England's George commits to scandal-hit Saracens
Next on Sport24
WRAP: Super Rugby Unlocked 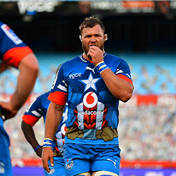