Rampant All Blacks rack up century to overpower USA Eagles 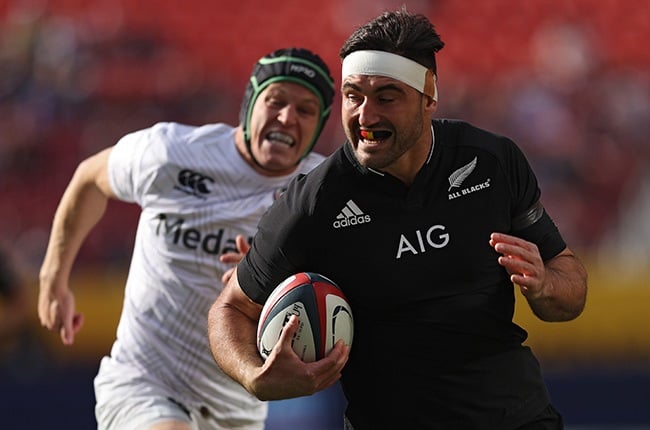 Luke Jacobson on the charge. (Photo by Patrick Smith/Getty Images)

Will Jordan scored three tries as the All Blacks overwhelmed the United States 104-14 on Saturday to launch a five-match northern hemisphere tour.

A dazzling masterclass of passing and flair by the All Blacks humbled the outmatched Eagles, who nevertheless managed their first-ever tries against New Zealand despite dropping their most lopsided of four blowout defeats in the all-time rivalry.

The match at FedEx Field, home of the NFL's Washington Football Team, set the stage for the All Blacks' visit to Wales next Saturday followed by November stops at Italy, Ireland and France.

The All Blacks were coming off a loss to South Africa three weeks ago that denied them an unbeaten run in the Rugby Championship while the Eagles suffered a World Cup qualifying loss to Uruguay two weeks ago.

New Zealand coach Ian Foster provided players who saw little action in the Rugby Championship a chance to show their skills ahead of European matches.

Sam Whitelock, who missed later Rugby Championship matches in Australia, took over captain's duties for the All Blacks with long-term captain Sam Cane returning in the second half after recovering from a torn pectoral muscle.

Moments after fans cheered the All Blacks performing the Haka, they watched New Zealand flanker Luke Jacobson score the first try only seconds into the match, taking the third pass of the day to complete a run down the left.

Prop Ethan de Groot, making his first All Blacks start, followed with a try in the sixth minute.

Jordan scored his first try in the 10th minute, kicking down the right wing over Will Hooley and racing around him to recover the ball before making the final four strides to the tryline.

Damian McKenzie took Quinn Tupaea's offload on a breakaway for a try in the 13th minute and Richie Mo'unga's third conversion made it 26-0.

Jacobson's second try came off a quick pass from Jordan in the 20th minute and Mo'unga scored on a superb run in the 25th minute then converted for a 40-0 New Zealand lead.

Jordan's second try came down the right wing in the 29th minute, Angus Ta'avao added another in the 33rd and Tupaea scored the ninth Kiwi try in the 37th.

But the Americans celebrated at the end of the first half as Nate Augspurger broke free, evaded McKenzie and raced over the line for the first US try against the All Blacks, kneeling and raising his arms skyward as the Eagles pulled within 59-7.

Ta'avao scored his second try seconds into the second half and Dalton Papalii added another in the 48th minute.

Eagles winger Ryan Matyas scored another US try in the 53rd minute, his grounding on the line withstanding video review, only for All Blacks reserve Anton Lienert-Brown to score a try in response in the 55th minute for a 78-14 lead.

Beauden Barrett came off the All Blacks bench and scored in the 67th minute as New Zealand took its largest lead ever over the Americans at 85-14.

Jordan added his third try in the 69th minute and reserve Dane Coles scored on a cutback run in the 79th minute and TJ Perenara scored the 16th and final All Blacks try after 81 minutes.

We live in a world where facts and fiction get blurred
In times of uncertainty you need journalism you can trust. For only R75 per month, you have access to a world of in-depth analyses, investigative journalism, top opinions and a range of features. Journalism strengthens democracy. Invest in the future today.
Subscribe to News24
Next on Sport24
Sharks load starting XV with returning Springboks for Bulls battle