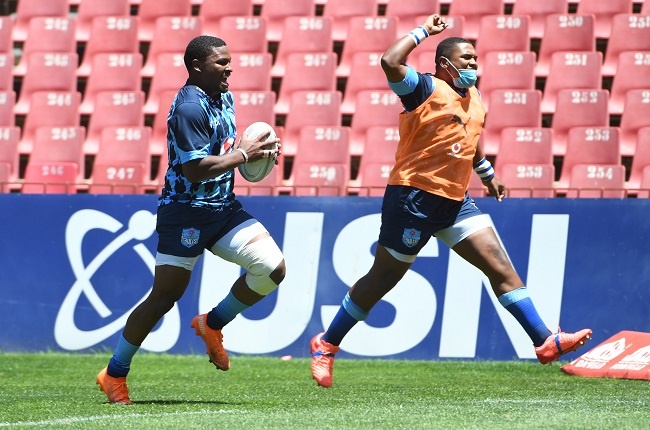 Diego Appollis of the Blue bulls u21 during the SA Rugby U/21 Championship match between Cell C Sharks and Vodacom Blue Bulls at Emirates Airline Park on October 16, 2020 in Johannesburg, South Africa. (Photo by Lee Warren/Gallo Images)

While the Bulls have relentlessly continued to produce fine Under-21 vintages, Jake White’s pedigreed presence is arguably laying the foundation for the union’s junior structures to scale even headier heights.

Hayden Groepes’ troops will on Friday defend their Provincial Championship title against the Lions at Ellis Park, culminating a stellar if short campaign defined by the newfound synergy between the Bulls’ respective teams.

"It’s been a real privilege to work with Jake,” said the Bulls Under-21 head coach.

"His experience is invaluable and that’s really helped me when I needed some advice or support. He’s always willing to help.

"More importantly, he’s really been actively involved with us in his duties as director of rugby. We’ve synchronised our structures, allowing the younger players to gain some experience at senior level and then seamlessly fitting in again when they come back to us."

Bulls' road to the final

That dynamic was apparent from the start, where prop Jan-Hendrik Wessels and wing Stravino Jacobs returned from game-time in Super Fan Saturday to play starring roles in the Bulls 36-25 winning start against Western Province in their campaign opener.

Yet the key to their march to the final has been the skilful use of a squad system.

"I’m very happy with how the players have responded," said Groepes.

"We’ve had a great squad of about 39 players available to us, so there’s great depth. I believe the challenge of emerging from lockdown and then commencing with an intense 14-week schedule, which has included the tournament itself, inspired the players.

"Everybody has pulled in the same direction, worked really hard and relish whatever opportunity they get."

Predictably, the results have been noteworthy.

The Bulls finished top of the log, scoring the most tries (22) by some margin while also only letting a season-low of nine.

That would certainly suggest a team capable of winning but varied rugby.

"I really have to complement my coaching staff for that," said Groepes, himself considered one of the most promising rugby minds in the country, who’s assisted by several experienced men such as David Manuel and Pine Pienaar.

"We’ve worked well as a unit to try and get the best out of the players."

Appropriately, their opponents in Friday’s showpiece were the only team to claim their scalp during the round-robin phase.

"The two best teams in this year’s competition are contesting the final. The Lions have really impressed with the rugby we’ve played this season," said Groepes.

We live in a world where facts and fiction get blurred
In times of uncertainty you need journalism you can trust. For only R75 per month, you have access to a world of in-depth analyses, investigative journalism, top opinions and a range of features. Journalism strengthens democracy. Invest in the future today.
Subscribe to News24
Related Links
Sharks without Springboks Du Toit, Notshe for Pumas trip
Centurion and 'freak' Healy still adds cutting edge to Irish pack
Schoolboy team-mates face off as Bledisloe rivals
Next on Sport24
Cheetahs set to lose 2 more players to European clubs