Redemption for Scotland after victory over France 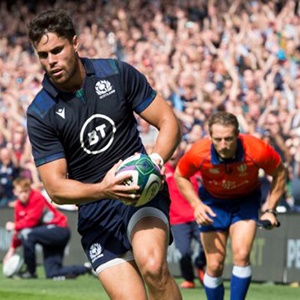 Edinburgh - Chris Harris' converted second half try gave Scotland their first win in six Tests as they beat France 17-14 in a Rugby World Cup warm-up Test at Murrayfield on Saturday.

Harris's effort and one from Sean Maitland at the end of the first-half - also converted by Greig Laidlaw - helped the hosts win from behind and bounce back from the humiliating 32-3 thrashing by Les Bleus last weekend.

Pleasing for head coach Gregor Townsend - who made 14 changes to the starting XV from the first match - was they held the French scoreless in the second-half.  Worryingly he lost three players to injuries in Tommy Seymour, Sam Skinner and Blade Thomson on his debut.

"It was a great opportunity for us after last weekend and winning makes it all the sweeter," Scotland captain Laidlaw said.

"We never started well but we dug in deep and had trust in the group. Our defence went a long way to winning the game - and international rugby is all about winning," he added.

The visitors' captain Guilhem Guirado praised his side's impressive start but complained about their failure to cross the Scottish line during the final 40 minutes.

"We started very well, we put a lot of pressure on them with our defence. It's a pity we lacked accuracy," Guirado told France TV.

"What we lacked was keeping the ball well, as to be more dangerous. We also scored zero points in the second-half which is a shame," he added.

Things looked ominous for the Scots early on as Penaud intercepted and ran half the length of the pitch to touch down in the second minute. Thomas Ramos converted.

Laidlaw reduced the deficit shortly afterwards with a penalty.

The Scots showed much more enterprise than in the previous clash, Sean Maitland making a great solo break deep into French territory but his good work was spoiled as the home side conceded a penalty allowing the visitors to relieve the pressure.

An error by Finn Russell cost the Scots dearly a few minutes later.

The fly-half failed to gather a high ball giving the French possession. When it came to Gael Fickou he burst through midfield, leaving Maitland and Ryan Wilson trailing, then passed to Penaud who ran it in.

Russell tried to redeem himself with a beautiful chip over the French backline but Maitland could only flick it back inside on the touchline and Stuart Hogg was unable to gather the ball.

Maitland had more joy at the end of the first-half as he went over for his 12th Test try after Russell found him out wide.

Laidlaw knocked over an excellent touchline conversion to send the hosts in at half-time trailing by just four points, 14-10.

The Scots went ahead for the first time in the match on the hour mark as Laidlaw fed Harris, who crashed over. Laidlaw added the extras to lead 17-14.

After that, the Scots closed the French down, extinguishing any hopes the visitors had of just their fourth away win since the last World Cup.

We live in a world where facts and fiction get blurred
In times of uncertainty you need journalism you can trust. For 14 free days, you can have access to a world of in-depth analyses, investigative journalism, top opinions and a range of features. Journalism strengthens democracy. Invest in the future today. Thereafter you will be billed R75 per month. You can cancel anytime and if you cancel within 14 days you won't be billed.
Subscribe to News24
Related Links
Golden Lions to host Currie Cup semi after Griquas thriller
WRAP: Currie Cup
Star Springbok apologises to team-mates after failed doping test
Next on Sport24
Bok coach explains Handre Pollard omission: 'There is nothing sinister'