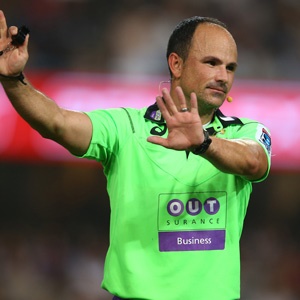 Cape Town - SA Rugby has congratulated local match officials Jaco Peyper and Marius Jonker, who were appointed on the official panel for the 2019 Rugby World Cup.

World Rugby announced the squad of 23 match officials selected to take charge of the 48 matches at the showpiece event in Japan, which runs from September 20 to November 2.

"The Rugby World Cup is the pinnacle event of our sport and to have two of our officials on the refereeing panel is a very good achievement. They both deserve this and on behalf of South African rugby I want to congratulate Jaco and Marius on their inclusion, and wish them well for the tournament in Japan," said SA Rugby president Mark Alexander.

This will be the second Rugby World Cup appearance for Peyper, who made his debut appearance at the 2015 edition in the United Kingdom.

He recently became only the fourth referee in history to officiate in 100 Super Rugby matches when he was in charge of the trans-Tasman clash between the Crusaders and Brumbies in Christchurch.

Peyper has handled 46 Tests, including the series between the All Blacks and the British & Irish Lions in 2017. Last year he was named SA Rugby’s Referee of the Year for a third time. He refereed his fourth Currie Cup final in Cape Town in 2018.

Jonker made his debut at first class level in 2003 and quickly rose to take charge of his first Test match in 2005. In all, he refereed in 24 Test matches - the last of them in 2011 and was also a member of the officials’ panel at the 2007 Rugby World Cup in France. Although he retired from refereeing in 2014, he continued to be part of the refereeing community as a TMO.

We live in a world where facts and fiction get blurred
In times of uncertainty you need journalism you can trust. For only R75 per month, you have access to a world of in-depth analyses, investigative journalism, top opinions and a range of features. Journalism strengthens democracy. Invest in the future today.
Subscribe to News24
Related Links
SA gets 1 referee, 1 TMO for Rugby World Cup 2019
Tribunal finds Folau guilty of 'high-level' conduct breach
Bulls offer 12 000 tickets at R20 for Crusaders clash
Next on Sport24
Relieved All Blacks coach Foster lives to fight another day