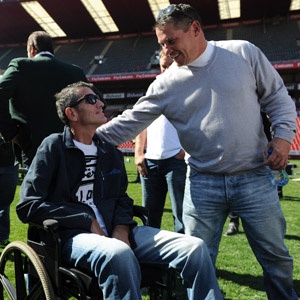 That is the view of Van der Westhuizen's 1995 Rugby World Cup-winning team-mate James Small, who spoke to Sport24 on Monday.

Van der Westhuizen passed away on Monday afternoon after a long battle with motor neuron disease. The news drew a massive response from the national and international sporting community.

Small, who played on the right wing in the 1995 World Cup final win over New Zealand, said he remembered Van der Westhuizen as a "jovial" character who should be remembered for the fight he showed during the final years of his life.

"He was a special guy ... a special rugby talent and he proved to be a very special human being in the manner in which he dealt with what he was given," said Small.

"In a game of 15 guys there are always one or two that stand out and Joost was one of them. He never lost it. There are a lot of careers that have highlights but also have lowlights and if you look at Joost ... he was never out of form.

"He worked hard, he trained hard and put a lot of effort into his game. He was special all the time."

Small, recalling his Sharks days, remembered that some of his team-mates, including Gary Teichmann and Mark Andrews, had a world of respect for Van der Westhuizen despite him being on the opposite team when they took on the Bulls.

"We had a very special love for Joost," an emotional Small remembered.

"The talent he was and also the character that he had. He was a jovial guy. He laughed on the rugby field and he played a lot of practical jokes on people. He was a guy we feared but loved at the same time."

Small remembers the time he spent with Van der Westhuizen on the night of the 1995 World Cup final ... but he says he has "so many" memories of spending time with a man largely considered to be one of the best scrumhalves the game has ever seen.

"One of the happiest memories was diving into the pond outside the Sandton Sun on the night of the World Cup final," Small laughs.

"I think that's one of our happiest memories.

"But there are so many. There was a night that we spent in Buenos Aires that was Ruben Kruger's birthday and we drove around in a limousine. There are so many things."

Van der Westhuizen's children - Jordan and Kylie - were two of the luckiest kids in the country, Small said.

"The biggest thing is how proud his children can be of who their father was," he said.

"That has to be the everlasting message here ... I think his kids can be two of the proudest kids in this country and around the world to have Joost as their dad."

We live in a world where facts and fiction get blurred
In times of uncertainty you need journalism you can trust. For only R75 per month, you have access to a world of in-depth analyses, investigative journalism, top opinions and a range of features. Journalism strengthens democracy. Invest in the future today.
Subscribe to News24
Related Links
Zuma: Joost one of the best
Teichmann, Sharks pay respects to Joost
Joost, the Springbok warrior who dumped Lomu
Next on Sport24
Lions' Fred Zeilinga trial shows they're adapting for European future