As it happened: Bafana Bafana 1-2 Nigeria That is it folk, THANK YOU for choosing Sport24 to catch this epic AFCON quarter-final encounter between Bafana Bafana and Nigeria ... STATS | Check out the full-time stats! Which team had the better overall performance? #TotalAFCON2019 #NGARSA pic.twitter.com/AF8BhUFov1

FULL-TIME: That's it, the referee brings this quarter-final to an end ...

Poor defending allows Ekong to tap in from close range ...

87' CHANCE! Hlanti whips in a half decent loss cross for Veldwijk but the strikers delay to pull the trigger back fires and loses the ball ...

83' Zwane's introduction has been immense as his link-up play has been better with Zungu ...

South Africans who held a low opinion of VAR before now have surely all changed their minds! Let’s go boys

VAR I misjudged you... you are actually incredible and I love you!

Bit more movement from Bafana since the equaliser, even if they still struggle to hold the ball for decent periods. Confidence crucially up, though! We're going to the wire?

75' All of a sudden, the intensity increases ... Bafana Bafana on a high and Nigeria keeping up now.

???? Don't think Daniel Akpeyi has played many games where his opponents haven't had a shot on target.

61' Bafana Bafana showing signs of frustration here ... losing it slowly now. Need urgency in their approach in attack and defence.

58' Really surprised by Baxter making that change so quick and early. But it is needed.

56' Mkhize and Hlanti not really influencing the game as much as they did against Egypt. An injection of creativity and energy is need, but who to bring on?

52' Furman to the rescue again as Mkhize struggles to keep up with Ahmed. The winger's low dangerous cross is knocked out for a corner.

Nothing comes off the dead ball situation

50' Etebo! What a strike from the dead ball situation as Williams get his fingertips on it just to flick it onto the post and out for a corner.

48' Massive loss as Hlatshwayo picks up a yellow car and will miss the next match if they qualify for the semis.

47' The opening minutes and Nigeria pressing the South Africans. Its all about the quick movement for both sides. 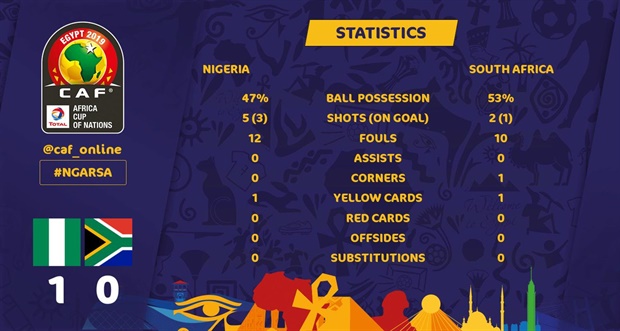 44' Mothiba's attempt to lift the ball over the wall, but his sneaky free-kick is headed away ...

42' CHANCE! Chukwueze slips past Hlanti in the penalty area but Dean Furman to the rescue with goal saving tackle!

40' Decision making has not been in Bafana's favour tonight. Especially in attack!

Super Eagles cranking up the tempo in steamy Cairo ...

36' Ahmed darting forward on the left flank putting Mkhize under a lot of pressure before he slips and plays in Chukwueze who then scuffs his shot from 20 yards out.

32' Bafana really struggling to find space as Nigeria's back four not allowing Tau, Lorch or Mothiba to get any space.

28' Bafana Bafana unlucky with going behind after seeing much of the ball ...

A lapse in concentration and slight deflection off Buhle allows Samuel Chukwueze to pick up the loose ball in the penalty area and knocks it past Williams.

25' COUNTER-ATTACK! Furman does great in getting a 50-50 ball off a green shirt which then finds Tau on the right. The Brighton attacker plays in Lorch who then wants a one-two play but the return pass is bad.

24' Mkhize has since returned to the fold, yet to be tested and check whether he is feeling all good.