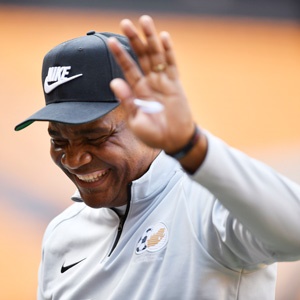 With all sport-related activities having ground to a halt in March due to the Covid-19 pandemic, sporting associations across the world have been left reeling as countries understandably prioritise saving lives.

Bafana Bafana head coach Molefi Ntseki, who was appointed in August 2019, was handed the already unenviable task of awakening a sleeping giant by qualifying for next year's 2021 African Cup of Nations (AFCON) and 2022 Soccer World Cup tournaments.

The 50-year-old now also faces the unprecedented challenge of guiding the men's national team to those goals by circumventing a pandemic and having to achieve immediate success.

With no live soccer, you'd think that like the rest of us Ntseki would be spending his time watching Michael Jordan's 'The Last Dance' documentary, or being a football man, the 'Sunderland til' I die' series on Netflix.

It was somewhat surprising then to discover just how busy he has been during the national lockdown.

"There's been a lot of work done behind the scenes," Molefi told Sport24.

"I've been doing a lot of reading, but the most important thing I've been doing regarding work is to consult and have football conversations with other coaches.

"In the past days and weeks I've had Zoom conversations with coaches like (Kaizer Chiefs head coach) Ernst Middendorp on football and also with (Golden Arrows head coach) Steve Komphela about the game and life in general during lockdown.

"I've also been in touch with players both locally and overseas. I've been talking to the Bafana team manager constantly because there's always something to do with regards the management of Bafana Bafana.

"I've also been in contact with health officials regarding the restart of football that we're seeing in other parts of the world. Such as what are the health risks and what is the best approach to restart football.

"The technical team of Bafana and all coaches have been in contact because it is important for us to have those football conversations. So that we can keep ourselves up to date on developments in the game currently."

Bafana Bafana currently occupy second position in Group C in the 2021 AFCON qualifiers behind Ghana after a 2-0 away defeat to the Black Stars in their opening fixture and a 1-0 win at home over Sudan in November 2019.

South Africa were due to face Sao Tome and Príncipe in a double-header on 27 and 30 November with six points a realistic target.

Even though football has been suspended indefinitely, Ntseki has used the downtime to plan in detail for the remaining four fixtures.

"The most important part of my conversations have been with my analysts as we have been working tirelessly on getting information on international and local football," Ntseki added.

"We are analysing individual players and also our AFCON and World Cup opponents.

"This is of course very critical as we need to qualify for both tournaments.

"Also East African countries like our (World Cup) opponents Ethiopia and what are the specific strengths of these teams and what do you expect from them in terms of playing style.

"Then you also have Sudan who are based in the northern part of Africa.

"So this has offered us an opportunity to go deeper in detail and even to analyse ourselves to see where we are. So whenever we do resume we will be able to know what kind of players we need and the mentality that we want to bring to the team."

Also read | How Wayne Sandilands stood up and faced the pain

It has been a remarkable journey for Ntseki, who hails from Botshabelo in the Free State, to the top coaching position in South Africa. Success hasn't come overnight and instead has been on an arduous journey since deciding to leave teaching to follow his passion.

He faces an enormous task in turning around a Bafana team who have massively underachieved in recent times. These failures are constantly used as a stick to beat SAFA with Ntseki's appointment receiving criticism - perhaps unjustly - labelling it as the cheap and convenient option.

It took just a Zoom conversation while in the presence of Ntseki to realise how passionate he is about football. How intelligent he seems when speaking on the game and how long the road has been he travelled to reach this point in his career.

Ntseki's first coaching role was in 1998 with Welkom Stars and it began a journey that saw him going from running a football academy to performing as an assistant coach at various youth national levels in South African football.

He's worked alongside the likes of Serame Letsoaka, Shakes Mashaba, Thabo Senong and as an assistant during the 2019 AFCON tournament in Egypt under Stuart Baxter.

"Every leader or every person that we see today as being successful has gone through life's journey," Ntseki said.

"Where you went through difficulty, to be successful you need to fall and pick yourself up to end up at where you want to be."

When pressed on how he wanted his Bafana teams to play and be viewed by the public, Ntseki agreed that we all want our national team to play with our unique expansive diski-styled identity.

He went into detail on how he sees football and how we as South Africans should showcase our strengths on the world stage.

"When I look back over my career and reflect, I think these are the things that were successful for me. Firstly you analyse your team and you profile your players in terms of their qualities.

"At times it is their qualities that will assist you in determining what type of football you will play.

"At a club level you don't have all the best players in your team. Also at that level you play each game to win and that means you're bringing in players to international level with different forms of backgrounds.

"You're not only looking at the technical ability of your players but also the tactical ability and mental ability. Today in football you need players who are intelligent.

"You can't have a player that is just talented but you need intelligence because football has become so analytical. You need to analyse each and everything that happens in football.

"If you have those kinds of players who can easily process information and apply it that will help," Ntseki said.

Ntseki also detailed how he wants his team to keep up with international trends while remaining true to our South African identity.

"I think with regards to possession, you'll see that over the years possession-based football used effectively is becoming big in the game," Ntseki said.

"Aggressive possession going forward while it is important to identify that vital moments in each game is more mental and attitude driven than being physical.

"When you are in possession the movement of players is important and needs to be well-drilled because every player needs to understand what should be happening in each moment during the game and that is very important.

"Secondly we must have the right attitude from players when losing the ball. What do we do when we lose the ball, is it physical, is it mental, is it attitude driven? Those are the things that we need to be very aware of.

"Be it an international team from a certain part of Africa then determining the strengths of the profile and physical qualities of players from that region.

"Then after doing all of that analysis you sit down with your technical team and selectors and identify the type of players you need because this is how we want to play against this specific opponent.

"The formation also will be determined by the analysis that we've done on the opponent and by the type of players that we're bringing into the team.

"So all of that needs to be taken into consideration and then you'll go into a training strategy and approach involving tactics and mentality.

"When you look over recent years you see similarities in teams like Germany when they won the World Cup and Spain here in South Africa in 2010. it was all about possession and technical ability and this is something that I think is a strength of South African football that we would like to highlight.

"If you profile SA players we are a highly talented country. Physically we are different from players in other regions and we depend more on our creative talents.

"We can agree that our players are skilful and possess creativity but those strengths must exist within a structure where each player must know his role and be prepared for the challenges thrown at him in each game.

"There are different ways to win football matches especially when you possess players with different attributed who can perform to various tactics.

"We have something very special which is mobility, to go with creativity and we are highly talented so these attribute will always dictate to us how we would want to play in the near future.

Ntseki will be aiming to bring immediate success to a nation that has been starving to see the national team represent the nation at international tournaments.

We live in a world where facts and fiction get blurred
In times of uncertainty you need journalism you can trust. For 14 free days, you can have access to a world of in-depth analyses, investigative journalism, top opinions and a range of features. Journalism strengthens democracy. Invest in the future today. Thereafter you will be billed R75 per month. You can cancel anytime and if you cancel within 14 days you won't be billed.
Subscribe to News24
Related Links
Former Pirates star slams club's lack of youth development
Modise talks of Rakhale possibly joining Kaizer Chiefs
Serie A meeting Italian Government to discover fate of season
Next on Sport24
WATCH | Champagne showers as Capetonians swarm Banyana star at airport