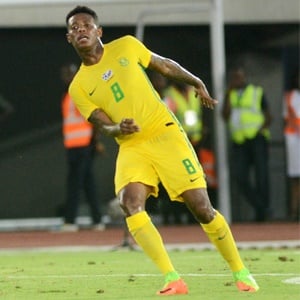 Danny Jordaan says Bongani Zungu has apologised to Bafana Bafana coach Molefi Ntseki over comments he made following his omission from the most recent national team selection.

The 27-year-old Amiens midfielder was left out of the squad to play Sao Tome e Principe in Africa Cup of Nations qualifiers in March.

The matches were ultimately postponed as a result of the coronavirus outbreak, but not before Zungu criticised Ntseki.

Jordaan was reported by TimesLive to have said: "I don't want to tell you what he said‚ but of course he [Zungu] did apologise. And we will deal with the matter when he's back in South Africa."

Jordaan added: "And sometimes players cannot deal with the disappointment once they get dropped. And he was very clear – he did not expect to be dropped. It was a huge shock for him.

"I don’t want to repeat the conversation. Because I asked him 'why?' [he made the comments]. And we did have a good conversation‚ and I did give feedback to the coach.

"We'll wait until Bongani gets home. He wants to come home. His team‚ Amiens‚ has now been relegated. When he comes we'll get Ntseki and we’ll deal with the matter."

We live in a world where facts and fiction get blurred
In times of uncertainty you need journalism you can trust. For only R75 per month, you have access to a world of in-depth analyses, investigative journalism, top opinions and a range of features. Journalism strengthens democracy. Invest in the future today.
Subscribe to News24
Related Links
Hodgson has no fears over Premier League return despite virus
Rabiot set to return to Juventus, laughs off 'strike' claim
Former Sundowns star struggling with depression
Next on Sport24
SAFA president Danny Jordaan: 'With Maradona's death, a piece of football has died'