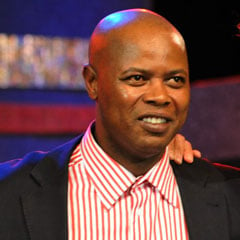 Cape Town - Bafana Bafana legend Phil Masinga has been admitted to Tshepong Hospital in Klerksdorp with an "undisclosed illness".

According to the City Press website, efforts to get the 49-year-old to a private hospital are in place in order for the former striker to get the best medical care.

Buddha Mathathe, President of the South African Masters and Legend Football Association, has confirmed that that Masinga is in "good spirits" after speaking to the retired footballer.

"I just spoke to him now and he is in high spirits. But we are making all the efforts to get him to Johannesburg to get the best medical care. We wish and pray that he gets better,” he said.

Masinga has earned more than 50 caps for South Africa and was part of the famous squad that claimed Bafana Bafana's first and only Africa Cup of Nations (AFCON) crown in 1996.

"Chippa (Masinga’s nickname) has done a lot for this country as a footballer. He was a good ambassador for the country and represented us well in England, Switzerland and Italy," Mathathe continued.

"Unfortunately, like many other footballers, he was never exposed to financial literacy and now finds himself in a bad financial state.

"We might be setting a precedent in helping him out, but we cannot fold our arms and pretend he has not done a lot for the country. He needs our help in this hour of need."

We live in a world where facts and fiction get blurred
In times of uncertainty you need journalism you can trust. For only R75 per month, you have access to a world of in-depth analyses, investigative journalism, top opinions and a range of features. Journalism strengthens democracy. Invest in the future today.
Subscribe to News24
Related Links
Bartlett named assistant coach at Chiefs
Baxter challenges Erasmus to get 1st XI football in Portugal
Baxter: Hosting AFCON a blessing and a curse
Next on Sport24
Bafana boss Hugo Broos: 'We are still looking for better players'