1-minute of silence for Sala at Champions League matches 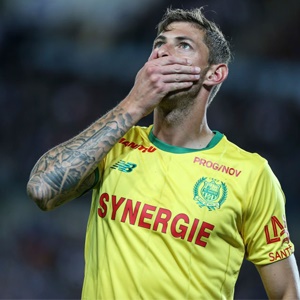 Nyon - UEFA confirmed one-minute of silence to honour Emiliano Sala will be held before all Champions League and Europa League matches this week.

Clubs can also choose to wear black armbands as a tribute to the 28-year-old Sala, who died in an airplane crash in the English Channel last month.

UEFA President Aleksander Ceferin said he urged "supporters across the continent to pay their respects to his memory over the coming days."

The Argentina-born forward was in a single-engine aircraft flying from Nantes in France to start his new career with English Premier League club Cardiff.

Sala's body was recovered from the wreckage last week, but pilot David Ibbotson is still missing.